The backbone: ISU's interstate to the Internet

It's one of the big, new things on campus this fall, but it lacks the visibility of new buildings, classrooms or art. Tucked away under the streets and sidewalks, the new fiber optics network, often called "the backbone," is out of sight and, mostly, out of mind.

Behind the scenes, however, the upgraded backbone -- with 10 times more capacity than the old -- makes a real difference to the university community, said Jennifer Lohrbach, director of networks and communications for information technology services.

From two lanes to interstate

Think of the old backbone as a two-lane highway with a 10G speed limit, Lohrbach said. A few years ago, traffic on that highway mostly consisted of desktop computers. In recent years, smart phones, tablets and other Internet devices have crowded onto the same road at a rate of up to 100,000 devices per day.

When the new fiber optics network, with its 100G speed limit, was installed over the summer, it became Iowa State's four-lane interstate. There's less congestion on the backbone, which means traffic on Iowa State's portion of the Internet moves a little faster. And there's room to grow.

The 100G network opens new avenues for researchers. High-speed networks give researchers an edge in a big data world. They can ramp up experiments. For example, Yong Guan, associate professor in electrical and computer engineering, said Iowa State's new network will allow his team to conduct Internet security experiments on a larger, more realistic scale.  Researchers also can exchange data with far-flung colleagues, zipping enormous amounts of data from one high-speed network to another.

"The new backbone significantly improves the performance of data transfers and puts Iowa State among the leaders in research network capabilities," Lohrbach said.

No high speed in your office

Lohrbach noted that the university community won't be opening documents and spreadsheets on their office computers at 100G speeds. Inside university buildings and offices, the network capacity drops to 1G, a perfectly adequate speed, Lohrbach said, since desktops and mobile devices aren't yet capable of handling high speeds.

In the interstate analogy, office networks are the on-ramps to Iowa State's high-speed backbone, which, in turn, is the on-ramp to the worldwide Internet.

Fine-tuning the carillon
The backbone: ISU's interstate to the Internet
Regents will receive eight business cases at special meeting
Celebrating a century of theater
A job well done 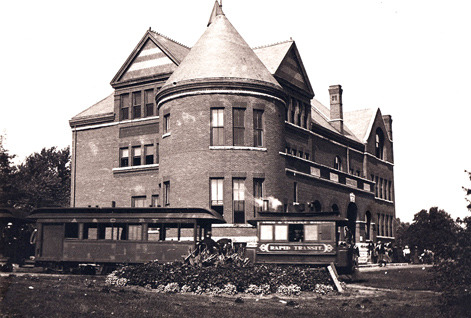