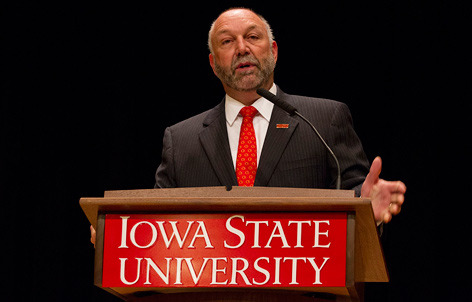 "Our faculty and staff do a tremendous job of connecting with the students. They offer them extra time during the class day. They offer them extra time on nights and weekends. I see people of all walks of life on this campus focused on helping students. That cannot be minimized. We need to keep that culture here at Iowa State. It really makes us special." President Steven Leath, Sept. 12 annual address. Photo by Gary Clarke.

Here are highlights from the president's address, delivered Sept. 12 in the Memorial Union.

Leath noted a number of ways "we have been working aggressively to expand the capacity of the institution."

"One of the major highlights I want to showcase today is that Iowa State secured a Tier 1 partnership for the $320 million Digital Manufacturing and Design Innovation Institute, which is based in Chicago. It's a tremendous accomplishment."
Steven Leath

"We're clearly growing the research enterprise, which is something near and dear to my heart," Leath said. He noted that sponsored research funding rebounded well from the previous year -- a "relatively off-year" that resulted from challenges caused by federal sequestration. Total awards were up 13 percent, the second highest total on record, and federal awards rose nearly 22 percent.

Leath said he's pleased with the progress of seven research teams that are tackling large global problems, such as food security, disease prevention and treatment, and crop acceleration. Funded though the Presidential Initiative for Interdisciplinary Research, the teams are finding "ways to grow Iowa State University's research enterprise by providing solutions to major problems facing our country and beyond." So far, investments in the teams have resulted in more than $133 million in grant applications.

The new facility is part of a major expansion at the research park, which has grown by 200 acres this year. In four years, the number of employees has increased from fewer than 800 to approximately 1,400. The goal is to add thousands more high-paying, high quality jobs in the next few years.

Leath co-chairs the Cultivation Corridor, an initiative aimed at making central Iowa the premier region in the country for the ag biosciences.

"I really believe that this is the future of our economy," he said. "It's how we will find new, sustainable ways to feed and fuel the world. This, too, will create the kinds of good-paying, stable jobs that our state wants and needs, and that our students are looking for when they graduate. Iowa State is perfectly positioned to successfully drive this initiative, because the biosciences are among our core strengths."

Making a welcoming campus more so

While Iowa State is the most diverse it's ever been, "I know we can do more to support our students, staff and faculty," Leath said. The president plans to hire a chief diversity officer to review and implement some of the recommendations from a couple of recent studies aimed at improving the campus environment.

He noted that more than 95 percent of faculty and staff have completed an online training program on discrimination and harassment prevention and Title IX policies.

"More students than ever before are on this campus. This growth is exciting. It highlights the incredible responsibility we have to live up to our pledge to provide the very best college experience possible. I know we can do that and keep true to our land-grant heritage."
Steven Leath

"We're also working hard here, as a land-grant, to make sure that family background, socio and economic status are no longer a predictor of success," Leath said. Iowa State has joined 10 other public universities in an alliance to help close the achievement gap and increase graduation rates for students from all backgrounds. The universities will share their expertise in relevant areas -- Iowa State's is learning communities. The University Innovation Alliance recently was unveiled in Washington, D.C.

Support from the state

Leath thanked the state Board of Regents, lawmakers and Gov. Terry Branstad for their roles in garnering enough state support to allow Iowa State to freeze resident undergraduate tuition for the second straight year.

He also commended former regent David Miles for leading the Performance Based Task Force that reviewed how the general state appropriation is distributed among the regent universities. The new funding model, recommended by the taskforce and approved by the regents, is more responsive to taxpayers, Leath said.

"It allocates a portion of the university's appropriation to in-state enrollment. It also allocates monies based on degree progress, degree attainment, access, diversity and statewide impact. I'm very pleased that the board of regents approved this recommendation and we now look forward to working with the Legislature and the governor to make it a reality." 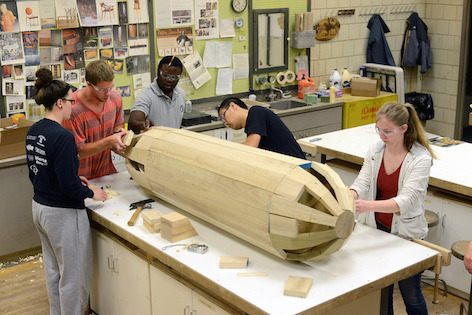