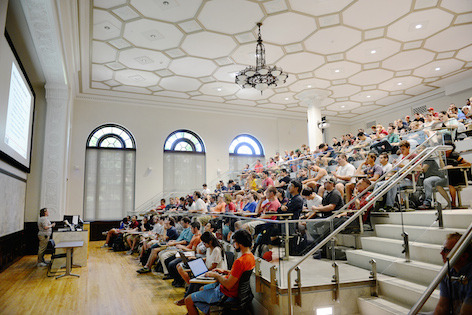 Students in the Introduction to Mechanical Engineering Design class (ME 270) have no trouble taking notes from the new projector screen in the Catherine J. MacKay Auditorium in MacKay Hall, built in 1926. The screen is one of the auditorium's modern additions, which also includes new stadium seating for 271 students, rotating chairs for classroom discussions and four monitors mounted throughout the space.

The auditorium was part of a $3.23 million renovation of MacKay that began in May 2013 and wrapped up this month. A classroom on the second floor also received a technological facelift, with two large monitors and four smaller versions throughout the 36-person capacity room. A welcome center for College of Human Sciences students was added behind the auditorium, while the vestibule south of the auditorium was brought back to its 1926 roots, now showcasing its original dark-stained wood panels. Photo by Amy Vinchattle.

The weekly -- and free -- series draws from feature films released in the last five months.