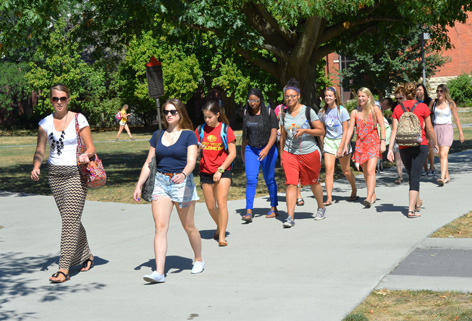 More students than ever have joined the between-classes trek across campus. Photo by Bob Elbert.

It's the fifth year of record enrollment and the seventh consecutive year of growth at Iowa State. The student body represents every Iowa county, all 50 states, and 106 countries.

As pleased as President Steven Leath is with the university's growing enrollment, he says it's far more interesting to examine what's driving the demand for Iowa State degrees.

"There are so many tangibles and intangibles that go into the college decision process. There's no single force that causes enrollment to rise, and over time, it will ebb and flow. But we can identify some contributing factors right now," Leath said. "We are both recruiting and retaining larger classes at Iowa State. There's high demand for programs of study that have long been our core strengths. Iowa State offers a robust student experience that allows freshmen to get involved on campus from their very first day – whether in learning communities, intramurals, clubs or other leadership opportunities. And in the end, students tell us they see a return on their investment because they get good jobs."

Overall, 94.3 percent of Iowa State graduates are either employed or pursuing further education within six months of graduation.

Fall 2013 marks the highest resident undergraduate enrollment ever at Iowa State – 18,009. More than 65 percent of Iowa State's 27,659 undergraduates are Iowans.

This year, Iowa State has attracted its largest freshman class ever – 6,089 – and 3,540 (58.1 percent) are Iowans. Each year, Iowa State enrolls more Iowa high school graduates as new freshmen than any other four-year school.

"Most important, we are admitting students who are prepared to succeed at Iowa State. The qualifications of our incoming students remain high," Leath said, citing consistent mean ACT scores, high school GPA and class rank.

'Fall' for this semester's lecture series

Mark your calendar. This fall's lecture series promises something for everyone.