The state Board of Regents gave the FY14 university budget the final OK, endorsed recommendations of a transparency task force and heard a report on ISU's strategic plan during its Aug. 8 meeting in the Memorial Union. The board also approved the creation of one center and the closing of two other centers and the Harkin Institute.

Iowa State's FY14 total budget is just shy of $1.29 billion, an increase of approximately $76 million (6 percent) over the FY13 budget. It includes a general fund operating budget of $614.2 million and restricted funds budget of $675.6 million.

In budget remarks to the regents, President Steven Leath said the university would allocate $35 million in new revenues to four overarching priorities -- "maintaining academic excellence, enhancing our basic and applied research efforts, promoting economic development and improving our campus environment, which has become especially critical with our enrollment growth."

Among allocations highlighted by Leath were:

Leath also described how two special purpose state appropriations -- $7.5 million to the Bioeconomy Initiative and $12 million to the ISU Research Park -- will be allocated.

Bioeconomy Initiative funds will be used to improve the research infrastructure, invest in research projects with strong entrepreneurial potential and attract more high-performing graduate students. Research park funds will finance construction of a new facility to house services and agencies that assist businesses.

The regents reviewed and approved recommendations (PDF) of its nine-member Transparency Task Force, a group charged with recommending best practices for responding to public information requests and giving Iowans access to information. Among other things, the task force recommended that:

Senior vice president and provost Jonathan Wickert presented a strategic plan progress report to the regents. He noted that in this fifth consecutive year of rising enrollment, "faculty and staff on campus have been working very hard to be able to meet student demand and to make sure that students are able to get the classes they need on time and to keep them on track for their graduation."

Wickert also noted successes in research and technology and in serving Iowans through extension and outreach. "We see Iowa State as a 99-county campus," he said.

Iowa State received permission to close two centers or institutes and open one. Those closing are:

The new center is the Iowa Nutrient Research Center in the College of Agriculture and Life Sciences. Created by state legislation during the 2013 session, the center will coordinate research and innovation that focuses on water quality and reducing farm field nutrients that make it to waterways. A $1.5 million state appropriation in FY14 and FY15 will support the center.

In other action, the board: 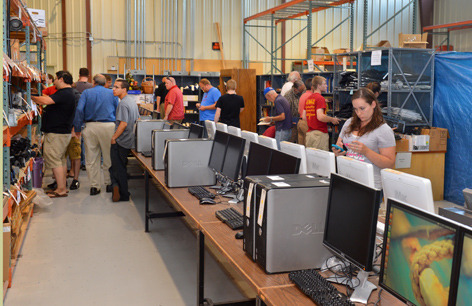 Nurturing an interest in science