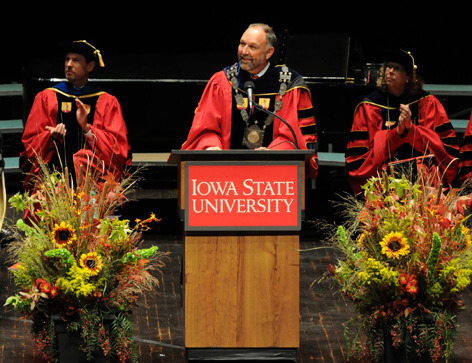 Leath shares his vision for Iowa State in his installation address. Photos by Bob Elbert.

President Steven Leath Sept. 14 announced a goal to raise $150 million in private gifts for student financial aid over the next five years.

Leath unveiled the goal in his presidential installation address: “Educate. Innovate. Achieve!” Leath, who assumed the leadership post last January, was installed as Iowa State’s 15th president in a ceremony at Stephens Auditorium.

Listen to "A Cyclone Fanfare"

In his installation remarks, Leath noted the generosity of Iowa State alumni and friends who pledged gifts for student scholarships in the most recent comprehensive fundraising campaign, which concluded in 2011.

“We as institutions have to do more to provide funding to help students pay for their education,” Leath said in his address.

The call for additional private funding for financial aid is part of Leath’s first priority: To insure that Iowa State continues to provide a high-quality educational experience. He noted that Iowa State is known as a caring university, one that is committed to helping students achieve their goals before and after graduation.

“My first priority is to continue to be true to this brand and this culture, and to continue improving our retention, graduation and placement rates, which means keeping the academic and student service programs strong,” Leath said. “But just as important, we must be accessible. And being accessible means being affordable.”

To address the problem of growing student debt, Leath announced a four-part plan: 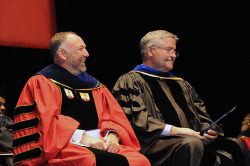 Leath said another major priority for his administration will be developing partnerships.

He noted this applies in particular to the university’s role in Iowa’s economic development. He applauded existing Iowa State programs that are devoted to strengthening business and industry, but said he wants to initiate a more integrated approach that maximizes the university’s potential.

“I have asked members of my senior leadership team to develop an economic development framework that will better assist Iowa companies and communities to prosper and grow,” Leath said. “Efforts will concentrate on the three state focus industries of biosciences, advanced manufacturing and information technology.”

Leath, who was directly involved with research-based economic development in North Carolina, said the state of Iowa has taken positive steps, but more effort is needed.

“We are in a competition, and we need to ramp up our efforts – and I intend for Iowa State University to take a leadership role,” Leath said.

One important role for Iowa State, he said, is to expand faculty expertise in areas that are critical to Iowa’s economic future, such as the biological sciences, agriculture, physical sciences and engineering.

He announced that senior vice president and provost Jonathan Wickert and the college deans will seek to add 200 faculty positions in these key areas over the next 18 to 24 months. Many of the new faculty, he said, will fill new positions and some will fill vacant positions. He emphasized faculty positions would not be decreased in other disciplines to meet this goal.

As part of his emphasis on partnerships and economic development, Leath announced that the research park now reports to his office. The Research Park previously reported to the VP for Research and Economic Development. Leath said he envisions the park becoming the “north anchor” for the Capital Corridor project, which seeks to further develop the Ames-Des Moines region.

In his installation address, Leath also announced initiatives to:

A student chats with the president at the installation reception.

Leath told his installation audience that the emphasis on the physical sciences, engineering and economic development would not diminish Iowa State’s commitment to the arts, humanities and social sciences.

“These programs will continue to play a vital role in the broad education and complete learning experience of our students, as well as in the delightfully eclectic character of this university and community,” he said. 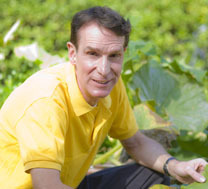