What you'll see and hear at the installation 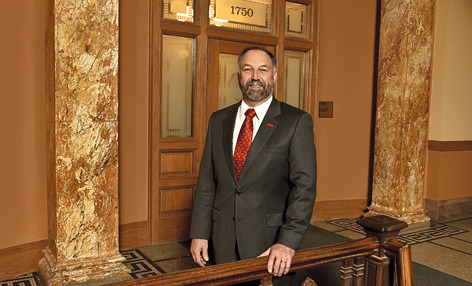 Iowa State history will be written Friday morning, when Steven Leath is installed as the university's 15th president. The 90-minute ceremony in Stephens Auditorium will include a colorful procession, Leath's vision for Iowa State and beautiful music that strikes a few Cyclone-pleasing chords. Here's a preview of what you can expect to see and hear at the event.

The ceremony will get off to a bright start when some 800 academics and students process into the auditorium.

The academic procession will include about 300 individuals, representing colleges and universities from around the country, learned societies and professional organizations, and Iowa State's academic departments, faculty and administration. The academics will wear the garb of the institutions they represent.

Marking the occasion in less traditional fashion will be approximately 500 student representatives who will process into the auditorium sporting cardinal T-shirts custom-designed for the installation. Check out the back of the shirts, emblazoned with Leath's license plate.

A vision for Iowa State

After he is installed by state Board of Regents president Craig Lang, Leath will lay out his priorities and plans for Iowa State. The installation and convocation address is titled "Educate. Innovate. Achieve!" The text of Leath's speech will be available on the installation website later in the day.

Music, of both classical and Cyclone genres, will be part of the installation. A new composition written by director of bands Michael Golemo will start things on the right note. "A Cyclone Fanfare," premiered by the ISU Wind Ensemble, will warm hearts among the cardinal and gold crowd.

"I used excerpts from the three school songs in a very symphonic and nontraditional way," Golemo said. "I also used a fourth unofficial school song that should be familiar to Jack Trice Stadium regulars."

Next on the musical roster will be internationally acclaimed bass-baritone Simon Estes. The university's F. Wendell Miller Distinguished Artist in Residence will perform twice, singing "The Star-Spangled Banner" and an aria from an opera by Giuseppe Verdi.

The Iowa State Singers, conducted by professor James Rodde, also will perform two pieces, including "The Bells of Iowa State."

Three ceremonial pieces will be part of the installation. Iowa State's mace symbolizes the authority of the university president. The chief faculty marshal leading the academic procession will carry the mace. A studded, armor-breaking weapon in medieval times, the modern mace is a staple in academic processions. 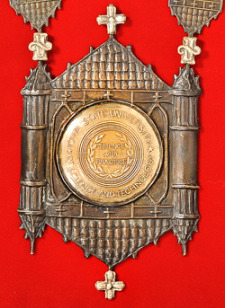 The presidential chain of office is worn on important ceremonial occasions. Photo by Bob Elbert.

The presidential chain of office symbolizes the rich history and traditions of Iowa State University and is worn by the president at important ceremonial occasions. It will be placed on Leath during the ceremony. The bronze and silver necklace is a relatively new addition to ISU tradition. It was first worn by former president Gregory Geoffroy at a 2008 commencement.

Leath will be robed in another piece of Iowa State tradition that debuted in 2008 -- Iowa State's doctorate regalia. The cardinal-colored gabardine gown features black velvet panels, edged with gold cord and adorned with the campanile.

On a historical note: The caps and gowns worn in American universities originated in medieval European universities. Function may have trumped fashion for the ancient scholars, who frequently worked in unheated buildings.

Joining president Leath on stage will be:

The installation is a university event. Employees may attend on work time, in coordination with their supervisors. Those who can't make it to Stephens Friday can view the ceremony live or later on the installation website. 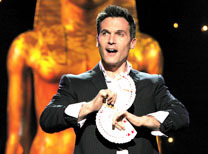