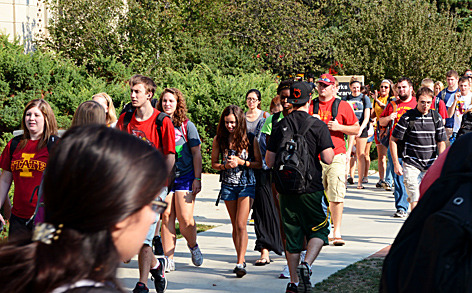 A record number of students -- including a record freshman class -- are attending Iowa State this fall. Photo by Bob Elbert.

It's another one for the record books at Iowa State University. This fall's student body of 31,040 is the largest in school history.

It's the fourth year of record enrollment and the sixth consecutive year of growth at Iowa State.

"Since fall 2006, our enrollment has grown by more than 21 percent, a significant increase that reflects the confidence students and their families have in Iowa State," said president Steven Leath.

"Our robust fall enrollment speaks to the value students and their families see in a degree from Iowa State. ISU's strong academic programs, vibrant student experience, and reputation for preparing graduates for the next steps in life ‐ be that career or an advanced degree – are all reasons more students are choosing to enroll here," said interim director of admissions Darin Wohlgemuth.

Six shows, including a "Stars Over Veishea" production of Fiddler on the Roof, are part of this year's ISU Theatre season ticket package.