Dr. Lisa Nolan, the Dr. Stephen G. Juelsgaard Dean of Veterinary Medicine, says there's nothing like it in the country. When seven years of phased construction and an investment of nearly $100 million in the College of Veterinary Medicine campus wraps up later this summer, the college will have added about 40 percent more space to its 1976 facility and renovated more than a third of existing space.

In another $18 million of utility improvements, the chilled water and steam generator plants were replaced with high-efficiency systems now independent of central campus, and electrical capacity was expanded significantly.

"We have a world-class facility here," Nolan said. "There are others making big investments, don't get me wrong, but I don't think our facilities are second to anybody right now. It's a really special place." 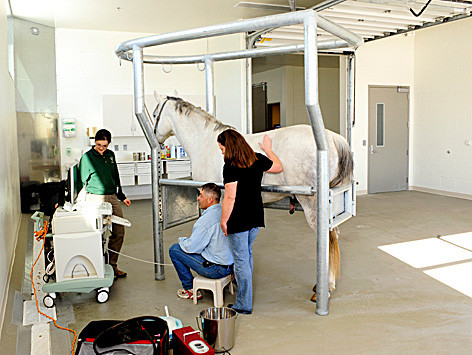 An ultrasound is performed on the front leg of one of the first equine patients admitted to the new large animal hospital in Februrary 2009. File photo by Bob Elbert. 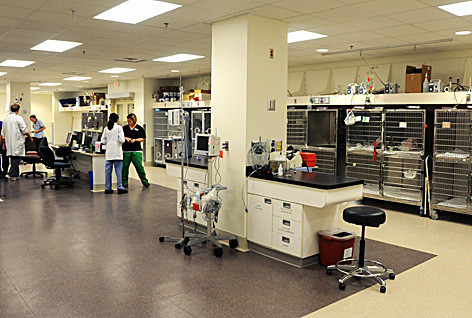 The spacious intensive care unit in the small animal hospital, pictured the week it opened in July 2011. File photo by Bob Elbert.

In the new spaces, the college has a state-of-the-art large animal hospital to provide care for horses, beef and dairy cows, swine, sheep, goats, llamas and more; dozens of day-lit faculty offices; additional rooms for teaching; an indoor riding arena to assess the health and gait of horses and a field services building, the home base for an expanded mobile veterinary service to Ames-area large animal producers.

In renovated space, the small animal hospital more than doubled in size. Upgrades to the state's only accredited veterinary diagnostic laboratory included converting a biosafety level 2 laboratory into a level 3 laboratory to test animal samples and animals potentially infected with highly infectious diseases. The lab processes more than 40,000 samples each year from livestock producers, helping them raise healthier herds.

That diversity is another feature that sets Iowa State's veterinary medicine program apart from many of the other 27 schools in the country.

While crowded conditions – for employees, for students, for animals – had been a key shortcoming with the Vet Med complex, Nolan is quick to point out that the changes aren't just about having more space. It's modern and thoughtfully planned space -- reflecting faculty and staff ideas and analysis of other facilities -- that contains state-of-the-art equipment, some of which didn't even exist in 1976. Like human medicine, veterinary medicine continues to evolve and specialize, Nolan said. And in part because of human medicine, animal owners' expectations about care for their animals have changed. Iowa State veterinarians can perform full hip replacement surgery on dogs, complete embryo transfers in cows or do MRI and 16-slice CT scan on small animals, for example. Dermatology, neurology, cardiology, radiology, anesthesiology, orthopedic surgery, reproductive medicine . . . ISU faculty are board-certified in 17 specialties, some of which not so long ago were reserved for human patients.

"Our facilities help us recruit talented faculty whose expertise allow us to give students a really broad background for a career in veterinary medicine. I'm really proud of that," Nolan said.

A hospital for students

The large and small animal hospitals that make up the Lloyd Veterinary Medical Center are teaching hospitals first. The surgery and treatment rooms include ample space for students to observe. The surgical suites also include digital cameras that capture the procedure, which can be shown on large plasma screens in the operating room or transmitted to a classroom elsewhere in the building. Some of the 22 small animal exam rooms include two-way mirrors so students' interactions with clients can be evaluated.

"We can give our students a much better experience now," Nolan said. And prospective students know it. "This year, we had over 1,100 applicants for 120 slots. We have to turn down a lot of qualified applicants who would make good veterinarians, but we just can't train them all."

Through a contract with the University of Nebraska, Lincoln, Iowa State also admits 25 Nebraska students annually, and for the final two years of their veterinary medicine program they're in Ames. The class of 2011 was the first to include a Nebraska contingent.

Motivated to invest in facilities

2004 -- the 125th anniversary of what is the country's first college of veterinary medicine – was significant for another reason. Following an accreditation site visit the year before, the college received a limited accreditation from the American Veterinary Medical Association, pending a follow-up review in 2006. A key shortcoming cited by the review team was the poor quality of about half of the space in the teaching hospital and diagnostic laboratory, including issues with air quality, deferred maintenance and crowded working conditions.

College leaders had begun planning for renovations a couple years earlier, but that review moved the process forward rapidly.

"[Limited accreditation] was a great incentive to change things, and it motivated a lot of people – including alumni (the college has nearly 7,000) and legislators.

"Under (former Vet Med) dean (John) Thomson, it all started to come together," she said.

In the spring of 2004, Iowa State secured bonding authority from the Legislature to begin renovations. The program returned to full accreditation in spring 2007 and was reaccredited in 2010.

Faculty numbers on the rise

The new facilities and the enrollment growth both have contributed to a growth in faculty numbers at the college. From 2005 to 2011, faculty numbers grew from 155 to 185.

"A lot of our faculty could be anywhere," Nolan said. "They come here for a variety of reasons; maybe because the teaching is important to them or being able to work at the cutting edge of clinical medicine or research, is important to them. Regardless of the reason, they're excited to be here."

Coming to a court or field near you: Iowa Games

Each weekend in July will feature amateur competitions on campus and in Ames as part of the Iowa Summer Games. July 13-15 packs a particularly full schedule, including an opening ceremony Friday evening just outside Jack Trice Stadium.