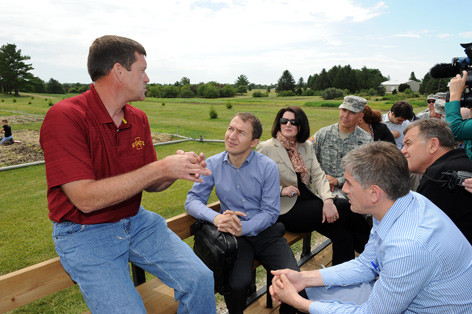 Atifete Jahjaga, president of the Republic of Kosovo, stopped by campus and the university's Horticulture Research Station east of Gilbert Wednesday.

The visit is part of a military exchange program between the Iowa National Guard and the Kosovo Security Force. The Guard, host of Jahjaga's three-day Iowa visit, is working to expand the program beyond the military by fostering Iowa-Kosovo relationships in such areas as education, agriculture and business.

The delegation met with ISU officials in Beardshear Hall for an introductory overview of Iowa State, then toured the Center for Crops Utilization Research in the Food Sciences Building and the Horticulture Research Station. 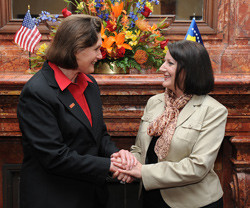 Among Iowa Staters meeting with the Kosovo delegation were: