Members of the Professional and Scientific Council discussed a salary recommendation for FY13 at their Feb. 9 meeting, turning a draft motion over to the executive committee to refine and submit to university administrators.

The draft motion introduced by the compensation and benefits committee asked for a minimum salary increase of 1.75 percent for employees who received satisfactory performance appraisals. The recommendation also encouraged the use of the exceptional performance pay program and additional funds to address market and other equity needs.

"The administrative units are required to plan for the allocation of salary increases, and that's a new concept," Behling said. "Prior to that, we had salary bills that provided the funding."

Dissatisfaction with the draft motion and a short turnaround time for its submission to administrators prompted the council's unanimous decision to send the recommendation to the executive committee for immediate work.

President-elect David Orman said the executive committee, which convened immediately after Thursday's council meeting, "settled on a 1 percent [minimum] recommendation." The recommendation was forwarded to the office of the executive vice president and provost. He said a revised draft motion likely will be approved at the Feb. 16 executive committee meeting and then forwarded to the University Budget Advisory Committee, which meets Feb. 27.

The council committees compiled lists of issues and priorities for a master "visioning list" that the executive committee plans to review over the coming weeks. Orman said the executive group will identify what items on the list to continue monitoring or move forward.

Visitors are invited to participate in an interactive art project, recomposing a Grant Wood campus mural on Fridays through April. 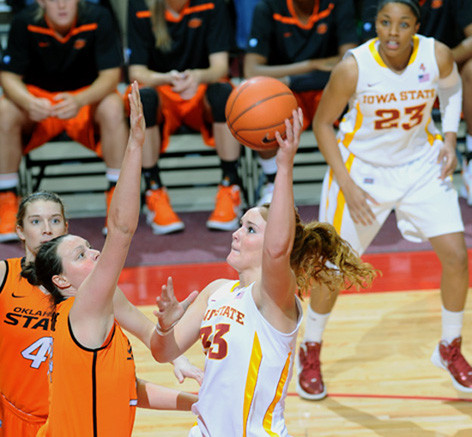 In the home stretch

The Cyclone women's basketball team will seek key wins at home this week.