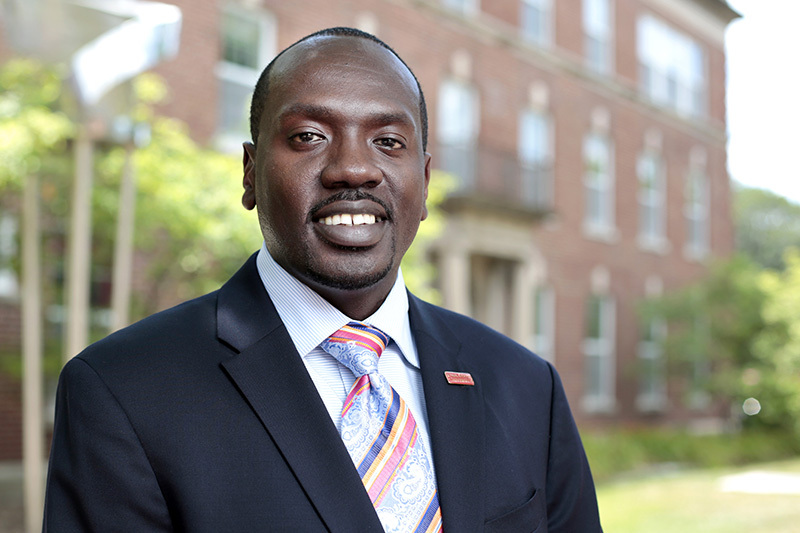 Vernon Hurte began July 3 as associate vice president and dean of students, an expanded position in the student affairs division.

Hurte arrives at ISU after 13 years of service at the College of William and Mary, Williamsburg, Virginia, including recent positions as assistant to the vice president, senior associate dean of students and director of the Center for Student Diversity.

Search is on for Iowa State's next president

The search for Iowa State's 16th president turns public today, with the online posting of an advertisement seeking applicants and nominees to lead the state's largest university.

The advertisement placed on higher education job sites outlines what attributes the state Board of Regents will be looking for as it hires Iowa State's next president, as well as the expectations it will have for the university's leader.

Consultants from AGB Search drafted the advertisement, which was approved by the 21-member search committee that will recommend finalists to the regents. The consultants held public listening sessions last month to help shape the advertisement and a presidential job description.

The deadline for applications and nominations is Aug. 24. Both can be submitted by email to iowastatepresident@agbsearch.com or presidentsearch@iastate.edu.

Publicly named finalists will visit campus for interviews in early October, with the board's selection planned later that month.

The search timeline calls for the new president to take office in early 2018, succeeding Steven Leath, who left Iowa State in May to be president of Auburn University, Alabama. Former Iowa State provost and College of Business dean Ben Allen is serving as interim president.

Developing a nose for Iowa wine 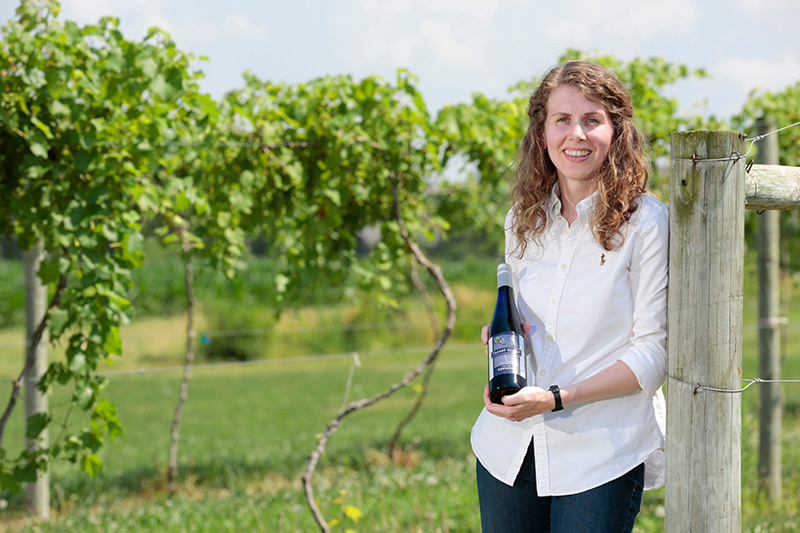 Erin Norton, education and outreach coordinator with the Midwest Grape and Wine Industry Institute, holds a bottle of 2016 Tassel Ridge Edelweiss in Iowa State's vineyards at the horticulture farm north of Ames. It is a recently certified wine in the Iowa Quality Wine Consortium program. Photo by Christopher Gannon.

The snobs who can evaluate wine critically -- casually and confidently detecting notes of, say, grass and grapefruit -- probably would thumb their noses at Iowa-made varieties, right?

Wrong and wrong, according to Erin Norton, education and outreach coordinator at Iowa State's Midwest Grape and Wine Industry Institute.

First off, the hybrid grapes that grow in Iowa and other northern climes can produce high-quality wines. Secondly, it doesn't take a know-it-all with a naturally sensitive palate and an air of superiority to appraise a wine's merits.

Later this month, Norton will lead an on-campus workshop that could help wine lovers, even those who don't consider themselves experts, cure both misconceptions.

Participants in the July 20 workshop, a crash course on how to evaluate wine, can apply to help assess Iowa wines as part of the Iowa Quality Wine Consortium.

The workshop aims to build a wine palate from the ground up. Participants start by tasting the flavor components of wine – sugar, acid and bitterness – isolated in water. Aroma training begins with wines doped to smell strongly of common scents such as peach or pineapple. Eventually, participants try specific varieties, including grapes grown in Iowa, to learn what flavors and smells to expect from each.

But a nose isn't built in a day. Continued practice is needed, though it doesn't have to involve wine. Norton encourages wannabe wine experts to smell everything, sniffing their way down the grocery aisle even if it draws baffled stares.

Taste can only get you so far with wine, which is why smelling is so important.

"When someone describes flavor, they actually are describing an aroma. No one can 'taste' pineapple, they taste only sweet and acid," Norton said.

While descriptions used in the wine world might strike some people as ridiculous, it's mostly a matter of building vocabulary and training the mind to recognize aromas, North said. One tip for palate improvement is tasting blind, she said. That strips away unconscious bias.

"You'd be amazed when you take away the word, the varietal, the doubt that starts going through your brain," she said.

Completion of the workshop counts as eligibility to apply to be on the Iowa Quality Wine Consortium's sensory evaluation panels. The IQWC program is run by the Iowa Wine Growers Association, with assessments administered by the wine institute.

Iowa wineries can submit wines for a chemical analysis and an evaluation by a five-judge panel drawn from a pool of about a dozen volunteers. The panelists use a 20-point scoring system to determine the wine's quality. Wines have to average 13 points to pass and be counted as an Iowa Quality wine.

About 450 wines have been assessed through the program, with 80 percent passing, Norton said. Winemakers can tout the "IQ" designation on bottles, though the branding has struggled to get a foothold. But comments from trained and unbiased wine tasters are equally important, said Mike Vincent who, with his wife, Connie, owns Wooden Wheel Vineyard in Keota.

"To get that independent opinion is really valuable," he said.

That's especially true in an emerging, northern wine-growing area. Vineyards have been growing chardonnay for centuries, generation after generation perfecting how they are best fermented into wine. Grapes bred to grow in Iowa are infants by comparison, just five to 10 years old in some cases, so winemakers still are experimenting.

"We're trying to push the industry forward a little bit quicker so we can help figure out what those styles are for these varieties," Norton said. "We've got hundreds of years to catch up on."

For instance, Vincent recently submitted for IQ analysis a wine made from petite pearl, a grape so new it's only had a name for a few years. He is eager to hear what the IQ panelists think.

Norton said the No. 1 misconception she hears about the state's wineries is that they only produce sweet wines. But many also wrongly dismiss the overall quality of Iowa wine, she said.

The IQ branding aims to help correct that notion, but Vincent said it hasn't taken off, so far, due to a lack of marketing funding. Vincent, vice president of the Iowa Wine Growers Association, said the group is working on tweaking the program to highlight IQ-designated wines at wineries, where more than 40 percent of Iowa wine was sold in 2016, according to an ISU Extension and Outreach report.

Also, Norton said she is planning a series of shorter wine evaluation workshops for consumers, in part to introduce them to Iowa wines. She challenges Iowa-wine skeptics to come to her workshop.

"I think they would be pleasantly surprised at the quality," she said.

Sketch of the entry and signage for Reiman Gardens off of University Boulevard (foreground), south of Jack Trice Stadium. Submitted image.

A construction fence is in place and work has begun on the final piece of a multiyear project to construct a club section in the south end of Jack Trice Stadium and landscape a former parking area south of the stadium to visually connect it to Reiman Gardens.

The Reiman Gardens entry and driveway off of University Boulevard was redesigned and replaced last summer as part of this project. Prior to the Sept. 2 home football home opener, thematic monuments on either side of the entry and a low signage wall that guides visitors to the gardens will be completed (see sketch above).

Work also will begin on multiple landscaping features in what used to be stadium parking lot S3. These include a large pool with a half dozen fountains, walkways including a raised circular platform, paved plazas, a large sculpture, permanent seating and signage, and garden plantings. Former first lady Janet Leath, who was involved in design plans, envisioned the plaza area as a site for football game day events and other special occasions.

Project manager Jon Harvey, facilities planning and management, said the structure work will continue as far into the fall as weather allows, with work resuming in the spring. The target completion date for this final phase is next June.

Harvey said the contractor, Mason City-based Henkel Construction, will use nearby lot S2 as a staging and storage area, but remove all items from the lot for the six home football Saturdays this fall.

The stadium expansion project began at the end of the 2014 football season.