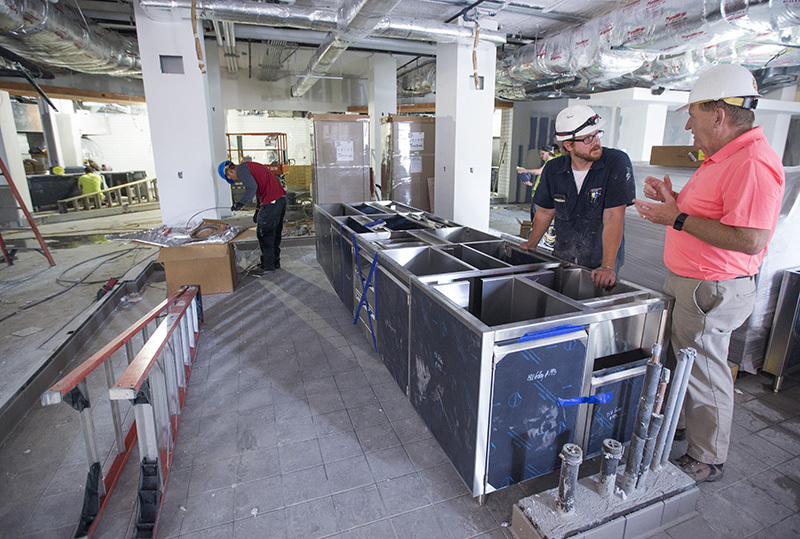 Mike Parsons (right), a construction manager in facilities planning and management, and a contractor look over new food service stations being installed in Friley Hall's Windows dining center. Kitchen and food serving appliances and consoles are arriving and being installed, while electrical, window, tile and duct work continue. Windows is scheduled to open with the fall semester. Photo by Christopher Gannon.

Iowa Staters talk about their next president

Equipped with hours of suggestions and requests, the consulting team from AGB Search will soon begin the task of drafting a job advertisement for the next president of Iowa State. The ad is scheduled to be shared publicly on July 6.

An estimated 60 people attended the four public listening sessions June 12-13 to share ideas on the skill set the next president ought to have and the challenges he or she will face. They also talked about the university's strengths and why candidates would find the Iowa State presidency compelling. They were undergraduate and graduate students, staff members, faculty, retirees, alumni, business people and Ames community members.

The sessions were facilitated by Jim McCormick and Janice Fitzgerald, AGB Search, and attended also by an array of search committee members and Board of Regents members, who ultimately will select the next president. The process is expected to wrap up by late October.

Individuals who were unable to attend a listening session are invited to submit their responses to the discussion questions (below) to presidentsearch@iastate.edu. To be assured consideration as the search consultants draft the ISU president advertisement, the deadline is Monday, June 19.

Following are some (not all) of the responses to those questions:

Challenges ahead for the university

Experiences, characteristics sought in the next president

Strengths of the university and Ames

In addition to the public sessions, the AGB Search consultants sought input through 22 interviews with individuals at the vice president through dean level. Student leaders and the Professional and Scientific Council also requested their own listening sessions with the consultants.

Without discussion, the state Board of Regents approved a second fall tuition increase of $216 per Iowa State student at its June 8 meeting. That's an additional 3 percent for resident undergraduates and between 0.4 percent (veterinary medicine nonresidents) and 2.5 percent (graduate residents) for all others over the 2017-18 rates the board initially approved in December. Combined, the increases create a 5 percent hike ($358) for Iowa State resident undergraduates and a 4.1 percent hike ($830) for nonresident undergraduates over fall 2016. The combined increase is $470 (5.5 percent) for resident graduate students and $870 (4 percent) for nonresident graduate students above fall 2016 tuition rates.

Following the tuition vote, the board's ad hoc tuition task force held its first meeting and received a presentation on national tuition trends from Robert Toutkoushian, professor of higher education at the University of Georgia. His research focuses on the economics of higher education and he consults with universities around the country. His observations about the state of Iowa included:

Board president Michael Richards said Thursday's presentation was the "beginning of an open dialogue" that will invite constituent groups and business leaders to talk about long-term funding strategies for the regent universities, including more predictable tuition for students and families. He said board members have no predetermined outcomes in mind, only that "what we're doing now has to be fixed" and that "everything will be on the table."

Noting, for example, that 65 percent of the students in his home school district (Marshalltown) are non-white, as well as the diversity within the state's workforce, McKibben said it will be important for the regent universities to figure out "how to take care of first-generation college students."

February changes to Iowa law governing collective bargaining rights transferred the task of setting annual step increases to the regents' annual salary policy discussion. In the fiscal year that begins July 1, no step increases will be awarded. The two-year collective bargaining agreement between the state of Iowa and the American Federation of State, County and Municipal Employees Council 61, which covers Iowa State's merit employees, calls for 1 percent increases on July 1 this summer and next.

As announced earlier this month, there won't be an across-the-board salary increase on July 1 for faculty and professional and scientific employees. Increases will be allowed only to reward exceptional performers or to correct market or equity issues, and every increase will require approval from the appropriate senior vice president/chief financial officer.

The board gave a first (of the required two) reading to several proposals. The second reading for each is to occur at a yet-to-be-scheduled board meeting in late June. They include:

University human resources leaders remind professional and scientific employees of the June 30 deadline to complete their Job Profile Tool (JPT), an early piece of a review of the current classification and compensation system.

P&S employees and their supervisors should have received an email on June 1 that contained instructions and a link to the JPT. Employees who think they didn't receive the email are encouraged to check their email junk folders. The email and JPT also are available on the classification and compensation review website.

Following are a few reminders about the process and purpose of the JPT:

A College of Design graduate student and two recent alumni are among 11 Emerging Iowa Artists selected to exhibit their work June 23-25 at the Des Moines Arts Festival.

In its 15th year, the Emerging Iowa Artists program provides young visual artists an opportunity to showcase their talent at one of the nation’s top arts festivals, which annually attracts more than 200,000 visitors. Iowa residents currently enrolled in or recently graduated from a university, college or art school anywhere in the United States can participate in the program for up to two years.

Chen, who holds a BFA with a focus on drawing, watercolor and photography from Shenyang Normal University, has devoted his efforts to handcrafted furniture and metal work. He derives inspiration from aspects of Chinese and American culture, including traditional Chinese musical instruments and Native American tattoos, and explores design motifs that reflect Eastern and Western cultural conflict and harmony.

Chen’s wood furniture is joined using rope and can be disassembled into individual pieces that represent other objects, such as a chair that can be transformed into the huqin, a traditional Chinese spike fiddle.

Haylock recently completed a yearlong apprenticeship as a bench jeweler for Jared the Galleria of Jewelry in West Des Moines and is now a self-employed artist in Winterset. She will exhibit a variety of metalwork from wearable silver filigree jewelry to functional brass art, she said.

Greteman exhibited architectural and travel photography as an Emerging Iowa Artist in 2013 and won Best in Show in the category for her printmaking last year, which secured her a spot among the professional artists this year. She and Alex Braidwood, ISU assistant professor of graphic design, served on the five-member jury that selected both the professional and emerging artists for this year’s festival.

Festival hours are 11 a.m. to 10 p.m. Friday, June 23, and Saturday, June 24, and 11 a.m. to 5 p.m. Sunday, June 25. Several of the emerging and professional artists will share their work and techniques in demonstrations scheduled throughout the festival:

Seven Iowa Staters were invited to exhibit their work at this year's event, July 23-25.