A window onto the (dusty) process 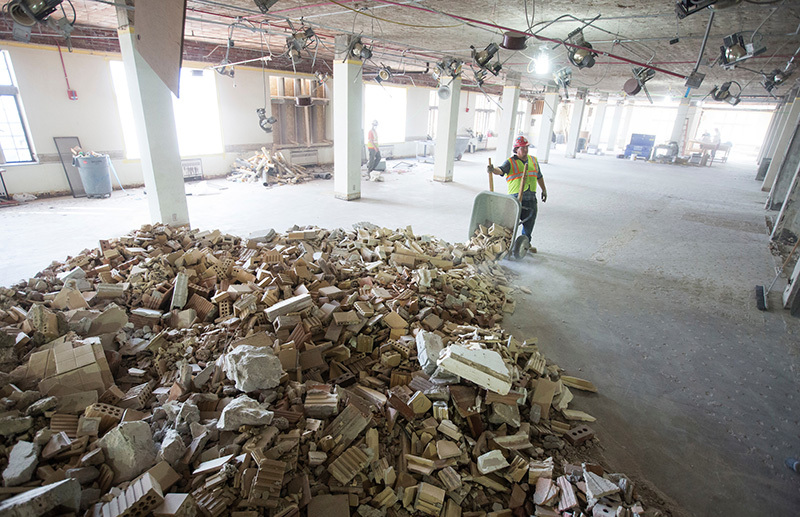 A demolition crew has been working since Oct. 17 to ready the site of the former Friley dining hall for ISU Dining's newest project, Windows. By Thanksgiving, work will shift to construction mode.

When it opens next fall, Windows dining center will feature three food stations and continuous hours from early morning through late night, with seating for at least 350 people. Menus will change throughout the day, including a late night option. In addition to serving students with a meal plan, the dining center will be open to the public.

The Friley dining center closed in 2003 when the Union Drive Community Center opened. (Above), crew members pile interior debris which subsequently will be transported outside to dumpsters for recycling. Below is an architect's illustration of the Windows venue. 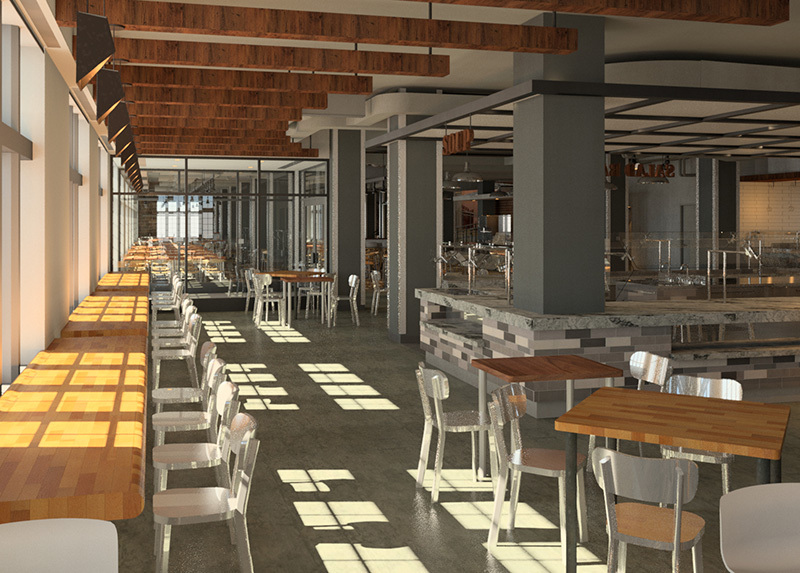 Questions, comments or concerns about the FLSA changes may be emailed to UHR classification and compensation.

By Rob Schweers, Office of the Senior Vice President and Provost
November 03

Launched by the office of the senior vice president and provost, Faculty Senate and Center for Excellence in Learning and Teaching (CELT), the initiative will support faculty who either create new U.S. diversity courses or significantly modify current courses that meet the requirement.

Faculty creating new courses can receive up to $10,000 in development support. New courses must meet departmental, college and university curriculum committee requirements, and must first be offered as an experimental ("X") course.

Faculty making major modifications to existing U.S. diversity courses can receive up to $5,000. Modified courses must continue to meet departmental, college and university curriculum committee requirements. Priority will be given to courses with a history of high enrollment.

"The initiative is a great opportunity for Iowa State's faculty to reimagine diversity education, particularly with a focus on current issues," said senior vice president and provost Jonathan Wickert. "I am hopeful we can better serve students, while at the same time create a national model for curricular excellence."

Since 1996, Iowa State has required undergraduate students to complete at least one course that focuses on multicultural society in the United States. This curriculum requirement was designed to help students achieve four distinct learning outcomes:

Currently, about 170 courses meet the requirement. However, as students and faculty have pointed out, not all of these courses may meet the four learning outcomes. The Faculty Senate curriculum committee is reviewing current U.S. diversity courses to make sure their content meets defined learning outcomes and reflects the education needed to enhance diversity and inclusion on campus.

Proposals are due Jan. 16, 2017. New and modified courses must be offered in the fall 2017, spring 2018 or fall 2018 semesters. The request for proposals and proposal template is available on the CELT website. Proposals will be reviewed by a committee that includes representatives from:

Funding decisions will be announced in February 2017. Multiple awards may be made in each area. Questions regarding the initiative may be directed to VanDerZanden or Mark Looney, chair of the Faculty Senate's equity, diversity and inclusion committee.

ISU Surplus will ring in the new year in a new location. By Jan. 1, the university's asset recovery and redistribution service will relocate to the south end of the central receiving facility at 925 Airport Rd. It will vacate the north half of the university warehouse facility at 1102 Southern Hills Dr., where it has operated since 2007. The final public sale in that location is Wednesday, Nov. 16. A Nov. 30 public auction is intended to drastically reduce inventory prior to the move.

In October, the state Board of Regents approved the university's request for a 10-year lease with the ISU Research Park for the entire warehouse. It will be used by research park tenant Merck and Co., which had been leasing the south half of the building. Last year, Merck purchased Ames-based Harrisvaccines. The building is valuable to Merck because it has been licensed by the U.S. Department of Agriculture.

Director of logistics and support services Norm Hill said his team is hopeful that the move proves to be temporary. He said plans for a new building near the central receiving site are being developed.

"We're committed to making this work," he said. "We'll continue to focus on serving departments and redistributing assets. Our service level won't drop."

Its temporary location in the central receiving facility measures roughly one-third that of its current space, said ISU Surplus supervisor Mark Ludwig. That will force him to display a little less variety and perhaps fewer computers and pieces of furniture, which require more space than other items. The sale room will look and feel "more streamlined," he said.

In the new location, the Wednesday public sale will double in length, 9 a.m.-3 p.m., with the goal of easing congestion and creating a better environment for customers. Hours for the Tuesday departmental sale (10 a.m.-noon) won't change.

"We'll make adjustments as we go, finding the right mix of items and adjusting to the crowds," Ludwig said.

"We don't like to landfill things. Our goal is to sell our way out," he noted.

With less space for inventory, he said he anticipates they may have to pursue recycling options more frequently. He also anticipates more sales on the government deals website, and sales of larger items in their departmental locations via a bid process.

"We are so aware that we need to be efficient in getting items out of departments so they can repurpose their space," Hill said.

Here's a quick look at the next few months in ISU Surplus:

Del Marks, a retired Iowa State University employee stopped by the Memorial Union recently to find the names of two fallen soldiers engraved on the wall of the Gold Star Hall. One was his uncle, who had died in World War II; the other was his high school classmate and ISU roommate, who had died in Vietnam. Marks shared their stories with Memorial Union staff and both will be among the four honored (see below) in the university’s annual Gold Star Hall Ceremony.

On Monday, Nov. 7, Marks, of Ames, will be in the audience when the university honors its casualties of war in the ceremony at 3:15 p.m. in the Memorial Union Great Hall. The honorees will be remembered through personal stories and photos. A reception and display of honorees' military memorabilia will follow the ceremony. The event is free and open to the public.

Iowa State's Memorial Union was created in 1928 as a memorial to Iowa Staters who died in World War I. Their names are engraved in the walls of the union's Gold Star Hall. Former students' names are inscribed if they attended Iowa State full time for one or more semesters and died while in military service in a war zone. As names become known, they are added to the wall and the soldiers are remembered in the university's Veterans Day observance.

Although the names of this year's honorees were previously engraved on the memorial wall, their lives and sacrifices have not yet been recognized in a Gold Star Hall Ceremony.

In 1928, the names of 117 Iowa Staters who died during World War I were carved into the walls of the Gold Star Hall.

In 1969, 10 bronze plaques bearing the names of 369 Iowa State men who died in World War II were mounted on doors to the Gold Star Hall.

In 1984, the bronze plaques were removed when names from World War II, Korea and Vietnam were engraved in the limestone walls.

Name additions have also been made in 2003, 2006 through 2011 and 2013, adding overlooked servicemen from World War I, World War II, Korea, Vietnam, as well as Somalia, Iraq and Afghanistan. 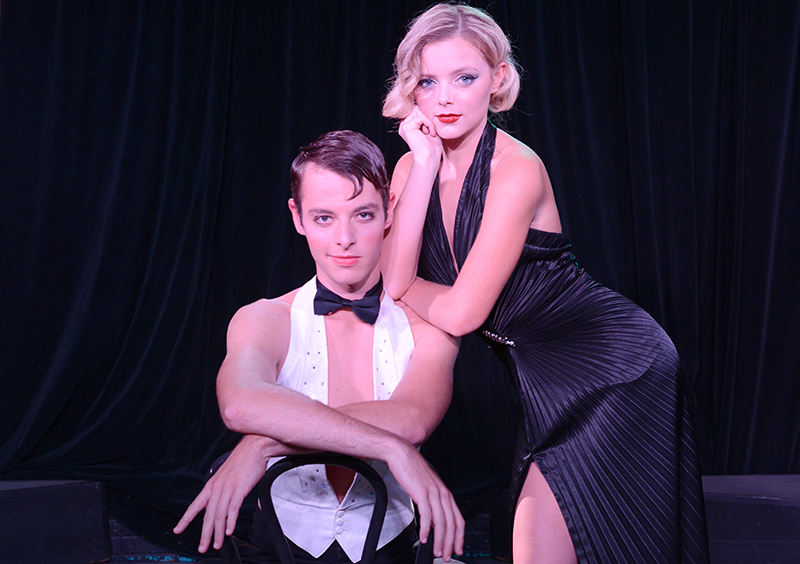 Junior Emmy Cuvelier (right) and senior Jacob Hopson portray Sally and the master of ceremonies, respectively, in a production of Cabaret staged by ISU Theatre and the music department. Photo by Nancy Thompson.

The audience will be transported to prewar Berlin for ISU Theatre's production of the Broadway musical Cabaret. The adult-themed show, which runs the next two weekends at Fisher Theater, opens Friday, Nov. 4.

Sally (junior Emmy Cuvelier) is a British singer performing in the Kit Kat Club, an underground nightclub hosted by an outrageous master of ceremonies (senior Jacob Hopson). Cliff (senior Christopher Culver) is an American writer who arrives in the city to work on his novel. The relationship between Sally and Cliff develops as the Nazi Party gains momentum, complicating their lives and the lives of those around them. Decisions made during the uncertain times reverberate as the future unfolds.

"Just as the original Cabaret hauntingly reflected the blistering society of 1960s America, our production inescapably parallels our own world today -- 2016 America and, in particular, the shockingly subversive 2016 presidential race," director Brad Dell said. "Cabaret illuminates just how easily horror can take hold if we abandon the truth, look the other way, or blindly say 'we have no troubles here.'"

Cabaret is one of two productions ISU Theatre will present in cooperation with the music department this season. A musical version of Little Women will run on weekends, March 31-April 9, 2017.

Show times for Cabaret are 7:30 p.m. on Fridays and Saturdays, and 2 p.m. on Sundays. Tickets, available at the Iowa State Center ticket office, through Ticketmaster or at the door, are $24 ($16 for students).