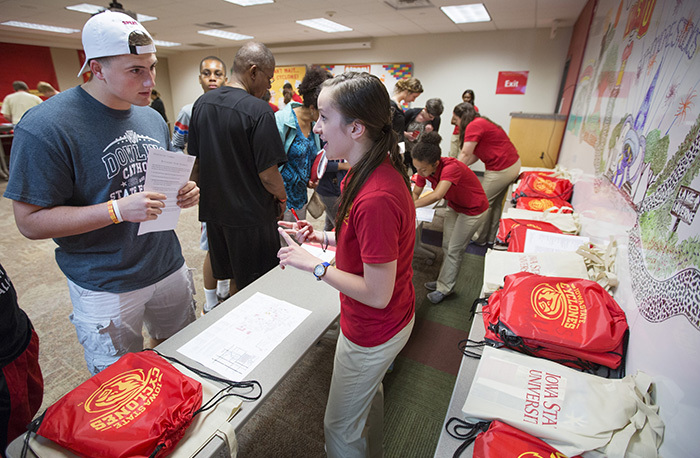 Cyclone Aide Megan Slattery (center) talks Wednesday morning with incoming freshman Nico Scigliano, Des Moines, in the Hixson-Lied Student Success Center. Hixson-Lied is where orientation students check in on the first day of their 2-day experience; from there, they fan out across campus for information sessions, tours, a resource fair and to take care of essentials such as an ISU email account, ISU Card and fall registration. Freshman orientation continues through June 30.

Pay structure changes are on the horizon

Iowa State's pay structure may be expanding, vice president for university human resources Julie Nuter reported at the May 26 Professional and Scientific Council meeting. A review and potential overhaul is tied, in part, to federal law changes that go into effect Dec. 1.

For the first time since 2004, a mandated change in the Fair Labor Standards Act (FLSA) will raise the salary threshold for individuals who qualify for overtime pay, from about $23,000 to $47,476. Nuter said this, coupled with Iowa State's P&S classification and compensation system that hasn't changed since 1993, precipitated a comprehensive review.

Nuter hinted at the addition of a third tier to what she called the current "binary" pay structure that offers two choices -- P&S or merit positions.

"That [two-tier system] is not sufficient for moving forward," Nuter said. "The jobs that have been defined as professional and scientific do not fit with the merit classification. So, what we need to do, as a result of this new regulation, is create that new structure to support this -- which really means creating a nonexempt structure that fits in between these two."

She said a "consulting partner" and steering committee will help with the review and development process -- taking a look at how ISU defines, organizes and categorizes its jobs, and examining the policies and procedures that support pay administration. She said a new structure would be market-based for competitiveness, focus on performance and ensure equity across campus.

Emma Mallarino Houghton, director of UHR classification and compensation, said the FLSA determination of overtime eligibility is not based strictly on salary. An analysis of duties (something that ISU already does) also is used to determine exemptions.

"We are currently reviewing the new regulations in as much detail as we can to really understand, not only from a salary standpoint, but also for certain classes of employees -- postdocs, residents and interns, graduate students, academic advisers," Mallarino Houghton said. "The Department of Labor has addressed all of these groups, but we're hoping they come out with more details as we move closer to Dec. 1."

Nuter said the impact of the FLSA change at Iowa State still is being determined.

"We have what I would say is a 'fuzzy' number at this time," Nuter said. "If we looked purely at the salary threshold, and the number of P&S employees, it's about 700 employees who are in these positions. If we ran a calculation on what the variance is between the current salary and this new threshold, it comes out to about $4.5 million, almost $5 million. So, just adjusting pay for positions is not reasonable or feasible, given the funding situation. But the reality is that we need to look at all of our P&S positions through this process."

Nuter also shared the FY17 salary parameters, which were sent to budget planners last week. The recommendation is, on average, a 3.5 percent increase for P&S employees and faculty. Employees with a satisfactory review will receive a minimum increase of 1 percent, and salary bumps over 5 percent would require approval from senior vice presidents. Employees with unsatisfactory reviews receive no increase.

Senior vice president and provost Jonathan Wickert said that salary increases could, and should, vary.

"The supervisor has the appropriate responsibility and authority to give raises at different percentages," Wickert said. "I encourage it. I expect to see differentiation, based on performance."

He added that salary increases are important in this year's budget planning process.

"The president made it very clear back in the fall, in his annual address, that compensation for employees was his No. 1 priority for the university," Wickert said. "It's very exciting for the president to make that happen."

Salary changes go into effect at the start of the next fiscal year (July 1), along with an FY17 P&S salary matrix that reflects a 1.75 percent adjustment. An FAQ document also is available online.

On the heels of an increase in state operational support next year that's less than one-third of what university leaders requested, Iowa State will make up the difference in additional tuition revenue. When it meets next week in Ames, the state Board of Regents will be asked to approve a $7.3 million addition to the 2016-17 tuition rates it approved, conditionally, in December. The proposed increases include $300 for resident undergraduates, who previously were looking at a tuition freeze; $100 for nonresident undergraduates and all graduate students; and $50 for all veterinary medicine students.

The board of regents will meet Wednesday and Thursday, June 8-9, at the alumni center. The full agenda is on the board's website, as is an audio live stream of open portions of the meeting. Wednesday morning and early afternoon are reserved for performance evaluations of the university presidents and board executive director Bob Donley.

These proposed tuition increases and the increases the board approved in December would generate an estimated $33.7 million in new revenue in the fiscal year that begins July 1.

Iowa State leaders sought an $8.2 million increase to the university's general university operating appropriation for next year; in April, the Legislature approved a $2.2 million increase, which the governor also signed last week. Back in December, board members pledged to revisit tuition rates if state support fell short of the regent universities' requests.

The university's annual salary parameters for the fiscal year that begins July 1 are in the board's consent agenda, for which there typically is little or no discussion prior to approval. President Steven Leath shared the parameters with university leaders in a May 24 memo.

As proposed, a 1 percent increase is the minimum salary increase for employees whose most recent performance evaluation indicated satisfactory work. Higher increases -- up to 5 percent -- are allowed for faculty and staff "who go above and beyond," as Leath wrote in his memo. Any proposed salary increase in excess of 5.0 percent requires approval from the appropriate senior vice president, and a form exists for that purpose.

Units will receive central funds for 3.5 percent performance-based salary increases, and that is the overall targeted average for faculty, P&S and contract staff (K base) and post docs across the university. However, individual units may finish with average increases above or below that.

Also on July 1, the salary points in the P&S salary matrix (for minimum, maximum, midpoint and first-third salaries in each pay grade) also will be raised 1.75 percent. The adjustment is intended to help align ISU salaries with changes to external market salaries.

Year two of the state's two-year collective bargaining agreement with AFSCME (American Federation of State, County and Municipal Employees) calls for a salary increases of 2.25 percent on July 1 and 1.25 percent on Jan. 1, 2017. Merit employees who haven't reached the maximum salary in their pay grades also will receive a 4.5 percent increase on their anniversary dates at the university.

In other ISU-related business, the board will be asked to:

These Iowa State faculty and staff are scheduled to give presentations to board members: