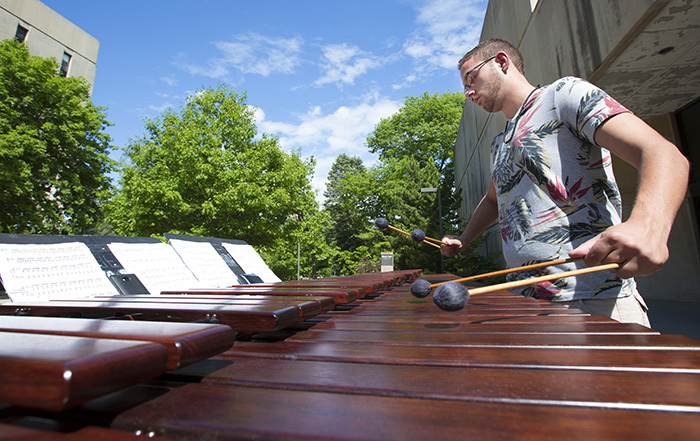 Music education senior Adam Kallal of St. Louis weaves an outdoor melody on the marimba while enjoying some sunshine outside Music Hall on a cooperative May afternoon. You can hear a snippet of his performance in a video posted on Iowa State's Instagram account. Photo by Christopher Gannon.

By Anne Krapfl
May 26 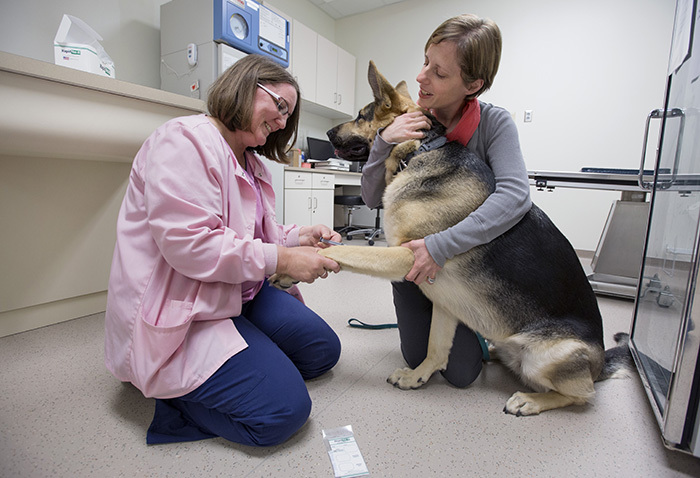 The campus blood donation program is looking for a few good donors . . . dogs and cats, that is. The College of Veterinary Medicine's 18-year-old animal blood bank relies on donations from local pets -- and those frequently are dogs and cats owned by students in the college. They're generous with their animals, but they also graduate and move on after a few years.

Most donated blood is centrifuged to produce blood products, such as plasma or red blood cells, which are refrigerated or frozen for use within the medical center with trauma, surgical and anemic patients, and with dogs who've ingested rodenticides.

As do human blood donors, these animals help save lives, LeVine said.

For animals selected for the program, blood donations are scheduled regularly -- about once a month for dogs and every two months for cats. The medical center provides preventative care services (at no cost) for its blood donor animals that include annual vaccinations, heartworm test and flea/tick prevention; routine health exams and food.

LeVine said this is a benefit to both the pet owner and the animal blood bank because it keeps supplies in the bank free of infectious diseases.

So what kind of dogs and cats make good blood donors?

LeVine said healthy animals between the ages of 1 and 6 years, preferably neutered, with current vaccinations and no history of disease, are great candidates. Dogs should weigh 50 pounds or more; cats should weigh at least 10 pounds. Some medications, including steroids, antibiotics and antihistamines, remove animals from consideration. In addition, a blood donor animal should have an unafraid, social temperament.

The screening process at the medical center checks for infectious diseases and types an animal's blood. Among a handful of canine blood types, blood donor dogs should have the "universal donor" blood type, DEA 1.1 negative. Between 40 and 45 percent of dogs meet this requirement, LeVine said; one of the factors that reduces the program's selection rate to about 50 percent of dogs screened.

It's an easier row for cats, where there essentially are two blood types: A and B. Ninety-five percent of cats in this country have type A blood, LeVine said. Type B blood is common in some exotic breeds such as British shorthair, exotic shorthair, Devon rex, Cornish rex or Scottish fold. All the same, "we'd be jumping up and down if we could find a B donor to have for an on-call basis," said Amy Hodnefield, a veterinary technician who coordinates the blood donor program. She said a cat's temperament tends to be the more significant screening factor.

Hodnefield said the actual blood donation takes less than 10 minutes, after which donor animals receive replenishing fluids, also intravenously. Cats are sedated with a short-acting drug during the procedure, dogs are lightly sedated if needed, but awake. The procedure is not painful to the animals and causes no harm to them, she said.

The volume of a dog's blood donation is 450 milliliters (about two cups); a cat's is 60 ml (about one-quarter cup). Hodnefield said pet owners usually drop off their animals for a few hours or for the day, whichever is convenient for them. The complimentary veterinary services for donor animals typically are provided during these visits.

LeVine noted that in most cases the medical center could purchase the blood products it needs from commercial blood banks, though some patients require freshly collected blood products. In addition to serving clients better, she said the blood donor program is an important piece of the teaching hospital's role in educating veterinarians.

By Diana Pounds
May 26

Both appointments are subject to approval by the Iowa Board of Regents, which is scheduled to meet in June. Gregory and Norton will be on the job at Iowa State, starting July 11.

Gregory currently serves on the board of directors of the U.S. Department of Energy's Fermi National Accelerator Laboratory, Batavia, Illinois. She was chief of civil engineers and commander of the Naval Facilities Engineering Command (NAVFAC), Washington, D.C., from 2012 to 2015. She also has served as commander at NAVFAC Pacific and force civil engineer for the U.S. Pacific Fleet, Pearl Harbor, Hawaii, and in various other assignments throughout the United States and in Naples, Italy, and Yokosuka, Japan.

Norton has been a partner in the international, industry-focused law firm Husch Blackwell (Kansas City, Mo., office) since 2004, as a leader in the firm's higher education practice group. Prior to that, he served six years as a senior associate with Jones Day, Dallas. He has extensive experience in many areas which are important to the role of university counsel, including Title IX compliance, employment law, data protection, policy development and training.

He received a bachelor's degree in political science (1992) from the University of Utah, Salt Lake City; and doctor of law degree (1995) from Drake University, Des Moines.

Norton will lead the office of university counsel, which serves as legal adviser to the university and its units. He succeeds Paul Tanaka, who became director of ISU's newly created legal services office in 1994 and retired earlier this month. Associate counsel Paula DeAngelo is serving as interim university counsel.