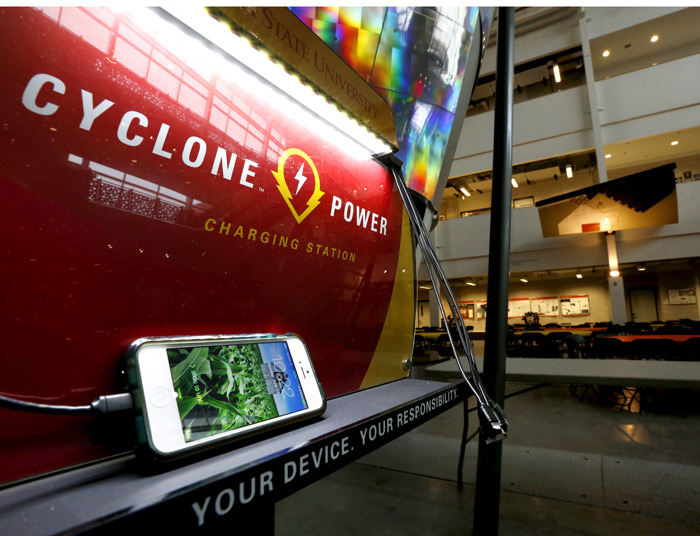 The College of Engineering has purchased 20 mobile device charging stations for visitors and students in its buildings. This one is near the C6 on the lower level of Howe Hall. Photo by Christopher Gannon.

A simple inquiry -- "Is there a charging station nearby?" -- from the parents of a prospective student this spring set in motion the College of Engineering's process to purchase 20 free-standing stations for the eight buildings it occupies.

Iowa State graphic design senior Sarah Van Berkum, who is interning this summer at PUSH Branding and Design in Des Moines (one of the university's agency partners), created the "Cyclone Power" graphic for the face of the charging station.

"Students live on their mobile devices and they constantly need to charge them," said Sadie Johnson, who coordinates undergraduate recruitment in Engineering Student Services and led this project. The service is "something people have come to expect – especially from a college of engineering and technology," she said.

The Engineering college isn't the first on campus to offer charging stations – the Memorial Union purchased two stations two years ago and Parks Library installed one near the circulation desk 18 months ago. But now, there easily could be more. The college worked with the purchasing department, university marketing and the trademark licensing office to select a product and put in place a contract that others on campus can use.

Charging in the library

In addition to purchasing a charging station, the library has invested in study tables with table-top outlets and USB ports as well as additional wall outlets in study areas along the north and west walls that also contain USB ports. All told, that's about 700 USB ports students may use for charging. There are an additional 1,000 USB ports – 2 to 4 per computer -- on public computers throughout the library.

The ChargeTech free-standing station plugs into any outlet and features eight charging connector cords for various mobile devices, which sit on a 3.5-by-16-inch, rubber-coated shelf while charging. The $549 price tag includes shipping and a lifetime warranty.

Associate director of purchasing Cory Harms said the model was favored by an ISU team that tested it and another product. Harms has negotiated a five-year contract with ChargeTech so other university units can purchase the units via a purchase order or P card. Product information soon will be available on the purchasing website and a demonstration model is available in the purchasing department.

Johnson asked building supervisors to select locations for the charging stations, with each building (Biorenewables Complex, Black, Coover, Durham, Hoover, Howe, Sweeney and Town halls) receiving one to three stations. High-traffic student advising office suites and building foyers are common locations, with the focus on serving campus visitors and current students. Johnson said they'll assess the value of those locations over time and move units as needed. For example, Marston Hall likely would receive a few stations when it reopens next summer following a 20-month renovation.

From patio to plaza at The Hub

Demolition is nearly complete as work continues on renovations and improvements to the outside patio area on the west side of The Hub. Crews have removed about 14 truck loads of concrete and brick pavers, installed a new draining system and filled and graded the space to raise the patio area to sidewalk level.

"There has been a significant amount of demolition work," said Rob Ebel, construction manager in facilities planning and management. " With the amount of concrete and reinforcement used in the original 1983 plaza and courtyard project, it definitely was built to last."

The new and larger plaza, which will include outdoor seating and a free speech area, is scheduled for completion by the start of the fall semester. Real-time progress can be watched on the public web camera located on Parks Library. The Hub is open during construction. 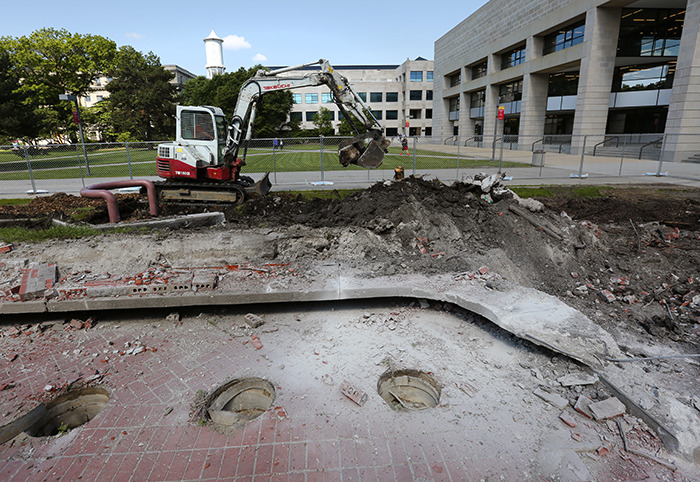 Removal of concrete and brick pavers west of The Hub on June 1. Photo by Christopher Gannon. 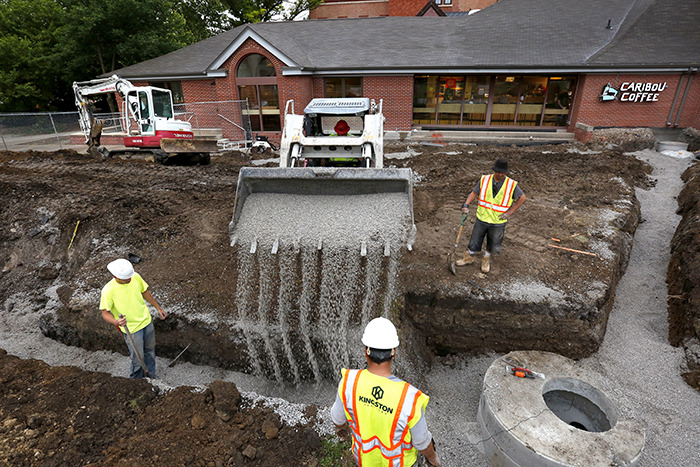 Workers backfill over a new storm sewer June 22, installed as part of the ongoing Hub renovation. Photo by Christopher Gannon.

A day at the (insect) zoo 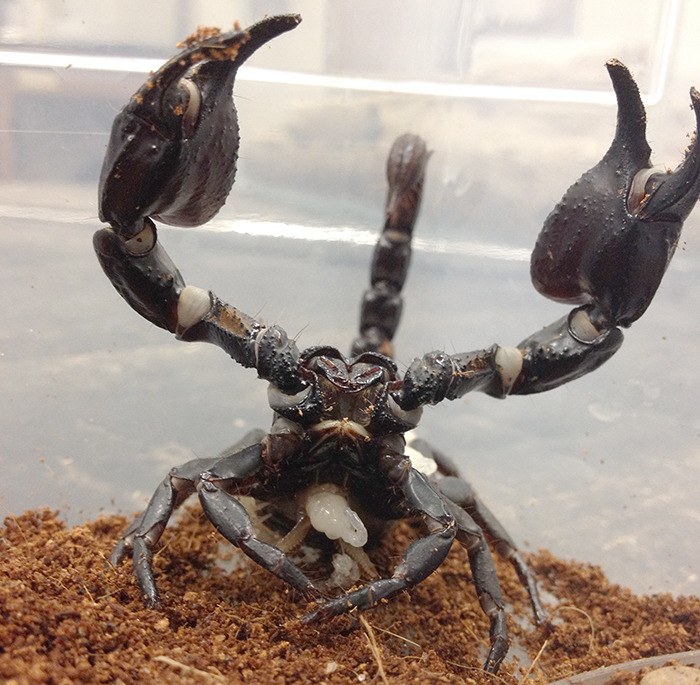 The entomology department's Insect Zoo will host an open house on Wednesday, July 1. The event, "Bug Village," will showcase the educational outreach program's arthropods from 10 a.m. to 6 p.m. on the first and fourth floors of Science Hall II. Admission is free and open to the public.

Activities include games, cockroach races and insect-themed art projects. Visitors can observe a working honeybee hive and get an up-close look at the zoo's estimated 80 arthropods -- including centipedes, tarantulas and scorpions (above).