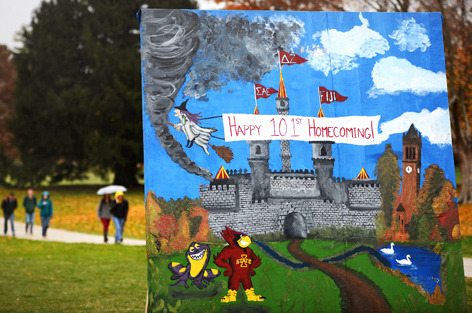 Pictured is one of the student Homecoming banners adorning central campus this week. Photo by Amy Vinchattle.

While some students reported that ISU Alerts emailed to them during Monday's emergency on central campus wound up in their spam folders, faculty and staff didn't experience similar problems.

The difference lies in the email systems. Students are on CyMail, a version of Google mail, and faculty and staff have Exchange (Outlook) accounts.

"It looks like Google may have tightened its spam filters in the last week," said Kent Ziebell, senior systems analyst in information technology services.

Spam filters are constantly changing in an effort to stay one step ahead of the spammers, Ziebell said. In this case, some new rule or criteria must have resulted in some ISU Alerts inadvertently being marked as spam.

Ziebell and Angela Bradley, ITS director in network and communications, are working with Google support staff to pinpoint the problem.

"They're responding fairly quickly," Ziebell said. "We're doing everything in our power to make sure this doesn't happen again."

In the meantime, Google staff have "whitelisted" ISU Alerts to allow them to bypass the filters. A whitelist identifies appproved senders that won't be filtered out as spam.

Bradley encourages students, faculty and staff to use all three delivery options for ISU Alerts -- text, email and phone.

"It's good to have multiple ways to be contacted in an emergency," she said.  ISU Alert preferences can be changed in AccessPlus.

In the aftermath of the Monday morning Ames police chase that ended on central campus with the death of a young man, senior vice president for business and finance Warren Madden comments on the university's response to the emergency. The letter below appeared in the Nov. 6 edition of the "Iowa State Daily."

The incident occurred about 10:30 a.m. Nov. 4 when Ames police, in response to a stolen pickup report, pursued Tyler Comstock, a 19-year-old from Boone, onto campus. Comstock drove recklessly around the central campus lawn. Ames police reported Comstock was shot and killed by an Ames officer, after revving the pickup and ignoring commands to shut off the engine.

The events that occurred Monday on the Iowa State University campus resulted in a tragedy – the loss of a young life.

For reasons we don't know and may never know, a young man drove recklessly through Ames and on to campus, ignoring police attempts to stop him. He placed many more lives in danger. Law enforcement acted swiftly to stop the threat and prevent further loss of life. Three minutes after the driver blazed through campus in a stolen truck, shots were fired by Ames police and the incident was over.

Yes, it was over and done with before most people even knew what happened. Police will tell you this is the reality of many emergencies. In a dynamic, quickly evolving situation, police have to make quick decisions to protect the community. Their first priority is to stop the threat. Officers on the scene did just that.

Police knew immediately after the shooting that there was no ongoing threat. But they needed to secure the area and verify what had occurred at the scene. They needed to know what happened before they could tell you what to do about it. That takes time. It isn't a failure of the ISU Alert system as some have suggested. It's reality. Police are the experts on the scene and determine when, or whether, to send an emergency notification based on the issue at hand. We trust their judgment.

It would have done no good to provide students, faculty and staff with an incomplete ISU Alert message, such as "shots fired,” with no actionable steps. As soon as vital information was available, ISU Police authorized the alert, knowing the message would reduce fear and limit the spread of rumors. I fully supported that decision.

There have been inaccurate, unfair and speculative notions about how Monday's situation parallels that of an active shooter on campus. It doesn't. These are two distinct incidents that would be handled differently as was done in this case. There is no script for an emergency. Had there been a shooter on campus, the ISU Alert system would have been activated along with the outdoor warning system that provides an immediate voice warning to community members.

We encourage all faculty, staff and students to log into AccessPlus and check their delivery preferences for ISU Alert messages. You may receive messages via email, text, voice -- or all three methods. Email is the most rapid delivery method, generally reaching all 38,000+ contacts within one to two minutes of the message being sent.

As with any campus emergency, university officials will assess our response to this incident and act on lessons learned. For example, we discovered for the first time on Monday that the ISU Alert message went to the spam folders of some student email accounts. This is unfortunate and unexpected, and we don't believe it's happened during any of the 20 or so prior uses of the ISU Alert system. But we're glad to know about the problem, and we're addressing it. Information technology services is working with Google to resolve this issue and ensure ISU Alert email messages don't wind up in spam folders again.

The safety of Iowa State students, faculty, staff and visitors is paramount, and I hope you know how seriously we all take that responsibility. We are thankful for the work performed by law enforcement officers, dispatch and support staff in dealing with a situation that was thrust upon us. We're also grateful to community members who were in the immediate area on Monday and allowed police to do their work. People were compliant, took protective measures and spread the word to others nearby.

And did you have spoilage? 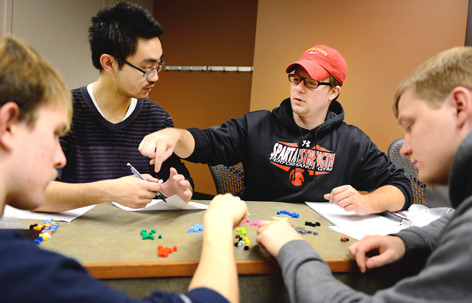 Students in Sue Ravenscroft and Christine Denison's junior-level managerial accounting class used LEGO™ pieces in class last week to simulate a manufacturing process and walk themselves through process accounting. On the clock, the team of (from left) Davis Thompson, Kun Zhao, Jaryd Eichinger and Zach Koziolek worked through considerations such as cost of materials, overhead, ending work in progress, spoilage and weighted average. "This is their chance to really learn what all these terms mean," Ravenscroft said.

Denison developed several LEGO group activities as a hands-on way for students to use the costing system being studied during a given week. Photo by Amy Vinchattle.

Don't be left out in the cold 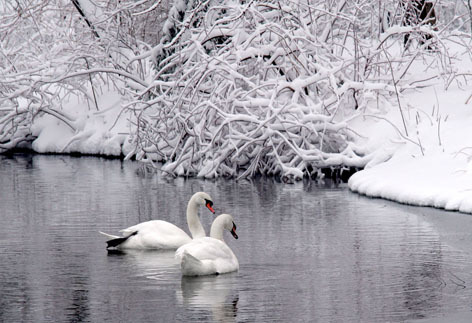 Photo submitted to ISU Photostream by Daniel Black, systems analyst in IT Services.

As radio stations switch to holiday music, it's time to (mentally) prepare for the possibility of inclement weather. Several campus policies and procedures apply when winter weather is forecast.

For information on cancellations and closures, check the: 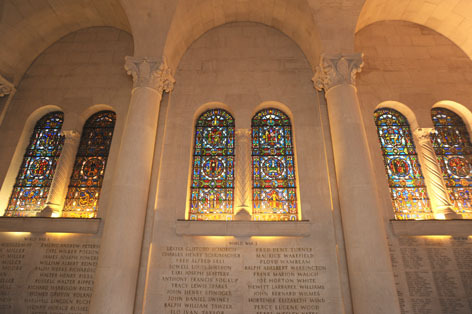 As Veterans Day approaches, a pair of events are planned to honor Iowa State's military personnel -- past and present. Two fallen soldiers will be remembered at the Memorial Union's annual Gold Star Hall ceremony on Friday, Nov. 8 (3:15 p.m., MU Great Hall). Robert Lynn Hodson, a casualty of World War II, will have his name engraved on the wall, and James Lee Merrick Jr., who was killed in Vietnam, will be honored for the first time.

A community supper is planned on Wednesday, Nov. 13 (5-7:30 p.m., MU Great Hall), in support of veterans, military personnel and their families. The meal is free and open to the public, but registration is requested to help with planning. Photo by Bob Elbert.

The annual Gold Star Hall ceremony (Nov. 8) and a community supper (Nov. 13) are planned to honor Iowa State's military personnel, past and present.