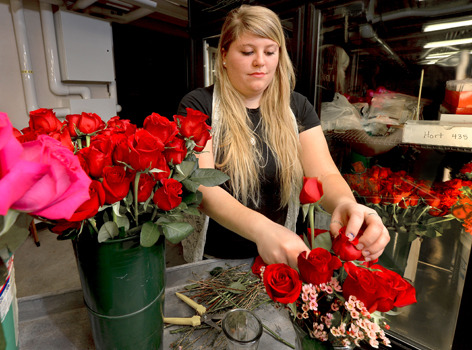 Nearly 500 fresh cut flowers filled the greenhouse coolers earlier this week as Horticulture Club members and club secretary Taylor Goetzinger (pictured) prepared for their annual Valentine's Day fundraiser. Club members will sell roses, carnations and Cyclone bouquets ($24-$36) from 9 a.m. to 4 p.m. on a grab-and-go basis outside the University Book Store entrance in the Memorial Union. Three varieties each of roses (red, pink and white) and carnations (red, pink and yellow) will be sold individually ($2-$4), or in half ($12-$24) and full dozen ($24-$48) quantities. Mix-and-match custom arrangements also will be available. Prices include greens, wax flower fillers, water tubes, wrapping and cards (vases extra). Photo by Bob Elbert. 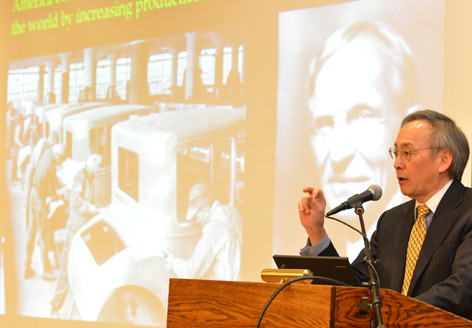 Energy Secretary Steven Chu calls for energy and climate action in a talk in the Memorial Union. Photo by Bob Elbert.

In a data-rich, chart-filled presentation (including one showing changes in refrigerator efficiency and price over decades), U.S. Energy Secretary and Nobel laureate Steven Chu made a call for energy and climate action on Tuesday.

Among the things Chu told a full house in the South Ballroom of the Memorial Union:

In addition to his public presentation, Chu also addressed researchers and staffers at the U.S. Department of Energy's Ames Laboratory.

Comments on recent events surrounding the Harkin Institute were shared as part of the update from the provost's office. Dawn Bratsch-Prince, associate provost for academic personnel, said it is "more than an academic battle, this is really a political battle," and it likely will result in a new state Board of Regents process when naming centers and institutes.

"[Sen. Tom Harkin] has stated he will not be sending his papers to Iowa State," Bratsch-Prince said. "We're frustrated and disappointed with that decision. We're also frustrated with the comments that we're reading in the media about how academic freedom is being suppressed. Faculty at Iowa State have objected to that interpretation of events."

Language changes for the Faculty Handbook policy governing annual performance evaluations passed with a nearly unanimous vote. Additional revisions (PDF) were made to the original motion, following senate discussion at the Jan. 22 meeting. The changes provide more detailed guidelines for the evaluation process.

Bratsch-Prince asked faculty to participate in the biannual faculty activity survey. The results are compiled in a faculty activity report submitted to the Board of Regents in August. This year, all three regent institutions are administering the same survey for uniform results.

Three new academic programs were introduced and will be voted on at next month's meeting. The programs include: 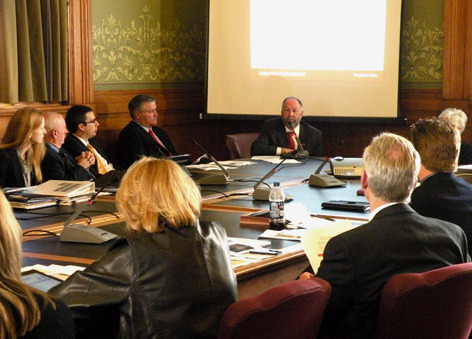 President Steven Leath made his annual funding request to the joint Education Appropriations subcommittee of the Iowa Legislature on Tuesday. He was joined by Iowa president Sally Mason, Northern Iowa president Ben Allen and Board of Regents president Craig Lang.

A key piece of Iowa State's FY14 funding request, submitted to the state in October, is an inflationary 2.6 percent increase to appropriations that cover operating budgets for ISU units.

One of Leath's messages Tuesday was that Iowa State operates efficiently and is a good steward of the state's investment. He shared a Wall Street Journal survey of 72 major research universities in which ISU ranked seventh most efficient in management costs.

"We are extremely efficient in terms of management (costs) and appropriately placing programs where they need to be," Leath said. "If you award us with money, we're going to spend it very wisely."

The PowerPoint slides that accompanied Leath's presentation are available on the president's website.

The search for the next College of Business dean is approaching the review phase.

Feb. 7 was the deadline for candidates to apply and receive preferred consideration, though applications will be accepted through Feb. 18. More than 30 applications had been received as of last week.

"The campus community has been very helpful in providing nominations for the new dean," White said. "We are very pleased not only with the quality of the applicants, but also with the diversity of backgrounds represented in the pool."

The search committee is scheduled to meet Feb. 27 to review and select candidates for the first round of interviews, which will be held off campus in early March. As proposed, finalists would interview on campus in late March and early April, with an announcement about the next dean expected before the end of spring semester. 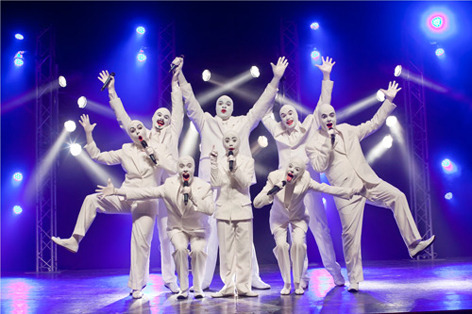 The Voca People will bring an out-of-this-world vocal experience to Stephens Auditorium during a 7:30 p.m. performance on Feb. 21.

The eight-person musical theater group, adorned in white costumes and ruby-red lips, features "Chaplin-esque" physical comedy, a cappella vocal harmonies, beatbox and other "mouth music." The group has no instrumental accompaniment or special sound effects; anything that sounds like drums, trumpets or chimes comes straight from the performers' mouths.

Voca People will perform more than 70 songs, from Mozart to Madonna to Queen and more.

Tickets, $34-$38 ($28 for youth; $25 for students), are available at the Iowa State Center ticket office or through Ticketmaster. Contributed photo.

The Voca People will bring an out-of-this-world vocal experience to Stephens Auditorium on Feb. 21.