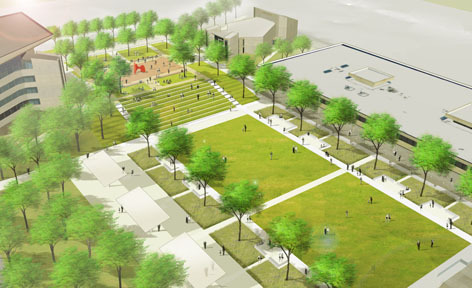 A team of landscape architects from Sasaki and Associates will present its final version of a master plan for the Iowa State Center courtyard area during an Oct. 9 meeting (4:30 p.m., 3512 Memorial Union). The site plan was developed using feedback from public meetings and key stakeholders. The plan is part of a $2.55 million project approved by the state Board of Regents in June. The meeting is free and open to the public. Contributed photo.

Find out more about new research initiative at forums this month

If you're looking for more information about the new funding initiative to support multidisciplinary research programs, plan to attend one of two forums that will be held later this month.

Forums are scheduled for:

At the forums, university officials will provide details and answer questions from teams interested in seeking funds through the Presidential Initiative for Interdisciplinary Research.

The "pursuit" funds will help teams of faculty researchers from across the ISU campus -- and working with researchers at other universities, companies, and laboratories -- to collaborate and prepare new large-scale research funding proposals.  Grants will be made by March for up to three teams.  Each team will receive up to $500,000 annually, for three years, for a total of $1.5 million per team.

"This initiative is intended to create a new culture of interdisciplinary and collaborative research at Iowa State, a culture that encourages 'thinking big,'" Leath said in his installation address.

The initiative also includes a smaller, proof-of-concept program, directed at research areas that are still emerging, more limited in scope or have a higher risk. Pursuit funding grants in the range of $50,000 to $100,000 could be awarded to help such teams also secure collaborative research grants.

Research teams seeking pursuit funding will submit a three-page white paper by Dec. 1. From the white paper submissions, some teams will be invited to prepare full proposals by Feb. 1, 2013. The final awards will be announced by March 1.

Questions may be directed to Tahira Hira, senior policy adviser to the president, 294-7239.

A new faculty award will recognize excellence in teaching and build a campus community of experts in student learning. Up to five Iowa State faculty members could be named Morrill Professors when the title is awarded for the first time next spring. The nomination process is under way now.

"We're really excited about this award," said associate provost Dawn Bratsch-Prince. "It's high-level recognition, on par with the Distinguished Professor and University Professor awards, for individuals who are outstanding teachers."

She noted that Distinguished Professors are honored for research excellence and University Professors are noted for being change agents in their service to Iowa State. The "missing component" in that lineup is recognition for accomplished teaching, she said.

Faculty members who are full professors, have worked at Iowa State at least five years and who excel at teaching are eligible nominees for the Morrill professorship. Their work could focus on undergraduate, graduate or extension/outreach programs. The excellence for which they are nominated could be in areas such as effectiveness in facilitating learning; scholarship of teaching and learning; service; activities and innovations.

Morrill Professors also become members in the new Morrill Academy for Teaching and Learning. As members, they are part of a community of experts and will be called upon to promote teaching and learning and to share their expertise. Bratsch-Prince said examples of what those responsibilities might be still are being discussed, but includes reviewing future Morrill Professor nominations.

As with Distinguished and University Professor awards, nominations for the Morrill Professorship originate in departments and clear a review by college awards committees before being forwarded to the Office of the Senior Vice President and Provost. That final deadline is Feb. 20, 2013; college deadlines vary from Nov. 20 to Feb. 1. Nomination instructions are online.

The Morrill Professorship had its genesis in the Center for Excellence in Learning and Teaching (2008) and later the Faculty Senate, which gave its approval to the award last November. Senators proposed the title to reflect both the 1862 act that led to the establishment of Iowa State as the nation's first land-grant school and the land-grant ideals of practical learning and accessibility. 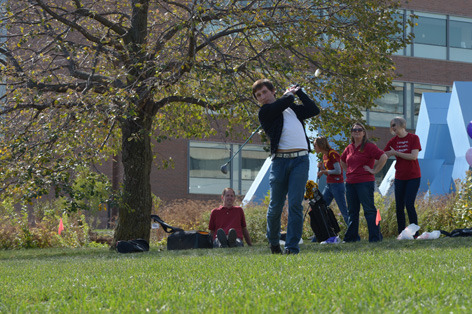 About 20 faculty, staff and students took time out from their lunch breaks last Friday to swing some golf clubs … at marshmallows. The College of Design hosted the "sticky" event to raise money and awareness for the United Way campaign, currently under way. The one-hour event raised $85.

Iowa State's 2012 campaign goal is $325,000. Last month, Iowa State employees received United Way contribution envelopes in campus mail. If you'd like to donate, complete the form and return it in the envelope provided by Oct. 15. If you misplaced your pledge form, you may print another one and return it to:

Iowa State officials have worked with the Story County auditor's office to provide early voting on campus the week of Oct. 15. Election Day is Nov. 6. Following are a few details on satellite absentee voting for Iowa State audiences:

Voters already registered in Story County may vote early on campus. Election officials will have ballots from all Story County precincts.

Faculty and staff who moved to Story County since the last election may:

Employees' residences must be in Story County to vote at a campus satellite location. If you commute to Iowa State from a community outside of Story County, you must vote in that county.

Voting will occur from 9 a.m. to 3 p.m. on these dates and in these locations:

A few notes about absentee ballots

At these satellite locations, voters are using absentee ballots. Voters must mark the ballot at the satellite station and leave it with the officials. They may not take the ballot home to complete later. The ballots will remain sealed until Election Day, when a bipartisan special board will count them. The results are not tabulated until the polls close. 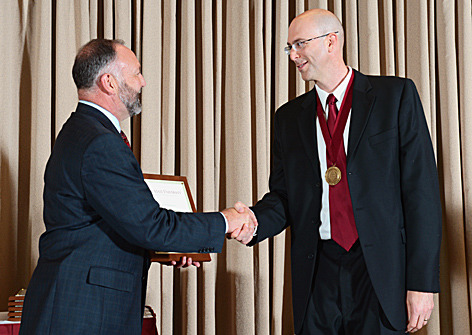 Professor of statistics Dan Nettleton (right) receives his Award for Mid-Career Achievement in Research from president Steven Leath at the university awards ceremony Sept. 21. Nettleton, holder of the Laurence H. Baker Endowed Chair in Biological Statistics, was one about 45 faculty and staff honored at the annual event. Photo by Bob Elbert. 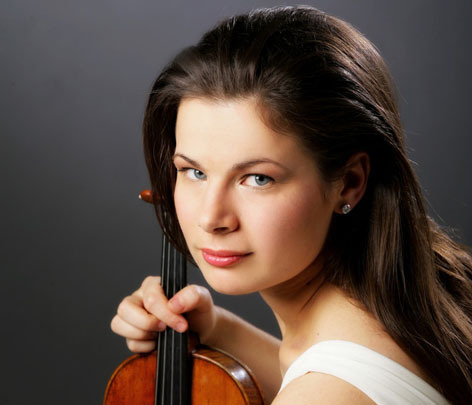 Award-winning violinist Bella Hristova will perform live on Thursday, Oct. 4, at Martha-Ellen Tye Recital Hall in the Music Building (7:30 p.m.). She also is working with area schools and organizations as part of the Iowa State Center's young concert artist residency (Oct. 1-4).  Among Hristova's many awards and honors is a first-place finish at the 2008-09 Young Concert Artists International auditions and a career grant from the Salon de Virtuosi, New York. The Bulgarian native tours extensively, performing as a solo artist and appearing with orchestras.

Tickets, $15 ($5 for students and youth), include a reception with Hristova following the performance. Tickets are available at the Iowa State Center ticket office and online through Ticketmaster. Contributed photo.

Award-winning violinist Bella Hristova will close out her four-day artist residency with a concert at the Music Building's Tye Recital Hall on Oct. 4.