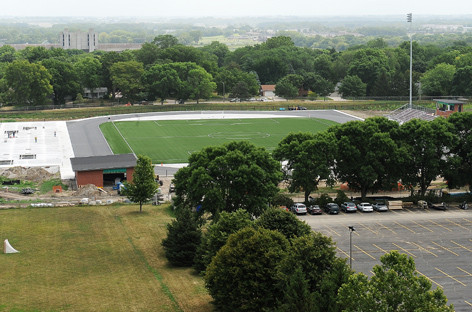 Work continues on the athletics department's state-of-the-art Cyclone Sports Complex east of the Towers residence halls. The soccer squad expects to open its 2012 home season Aug. 31 on the soccer field (pictured) against the Iowa Hawkeyes. Photo by Bob Elbert.

Leath to testify before Senate committee on college affordability

President Steven Leath will testify Thursday (July 19) before a U.S. Senate committee on the importance of making college more affordable.

Leath is scheduled to appear before the Committee on Health, Education, Labor and Pensions, which convenes at 10 a.m. (EDT) at the Dirksen Senate Office Building, Washington, D.C. Iowa Sen. Tom Harkin is committee chairman.

“I appreciate this opportunity to talk about the importance of an affordable college education and what we at Iowa State are doing to minimize the debt that students and their parents accumulate,” Leath said. “Higher education is a critical component in our nation’s future and in our ability to maintain our leadership position in the world.”

Also scheduled to appear before the committee are:

Leath assumed leadership of Iowa State University on Jan. 16, 2012. Prior to coming to Iowa State, Leath was vice president for research and sponsored programs for the 16-campus University of North Carolina system. He holds a Ph.D. in plant pathology from the University of Illinois, Urbana.

Facilities officials are beginning to see some savings from energy-efficient projects that were partially funded by government stimulus funds.

Jeff Witt, director of utilities, estimates that Iowa State will save some $460,000 in energy costs annually as a result of projects funded through the American Reinvestment and Recovery Act (2009).

In 2010, Iowa State received a $2.3 million grant through the Iowa Office of Energy Independence, which distributed ARRA grants to the Regents institutions. The grants could be used to fund up to one-third of the cost of energy-efficient projects.

"With the grant money and a $4.6 million university investment, we were able to replace inefficient equipment -- boilers, chillers, steam lines and lights -- that were well past their normal life spans," Witt said. "The new equipment was selected to maximize efficiency and minimize emissions. It will serve the university for many years, providing ongoing benefits of lower energy costs."

License plates with a story

By the Inside Iowa State staff
July 19

Interested in purchasing your own Cyclone plates? More information is on the Iowa DOT website. Half ($25) of the one-time purchase fee comes to Iowa State, where it becomes student financial aid.

We promote our families, our careers, our hobbies, our achievements. We tease, we remind, we rejoice, we lament. We get all that done in seven characters – or less – on our Cyclone personalized vehicle plates. Wow.

Following up on a popular 2006 summer feature, the staff of Inside Iowa State took to campus parking lots again this week, looking for Cyclone vanity plates that made us smile ... or simply made us wonder.

Here are some we found, accompanied by their owners' explanations of what they mean or why they were selected.

My plate means "Meat Science," which is my field of expertise for research and teaching at ISU. It's not "Empty Science" or "Mountain Science" as some might interpret.

Read as "Three True Fans." My husband and I are both ISU grads. Shortly after my son was born in 2006, my husband gave me personalized plates as a gift to represent our new family of three. We are starting our little guy on the path to being a Cyclone.

The message is straightforward -- I help bring the "news to you," and the "news to U" (as in, the university). The personalized Cyclone plates were an early birthday gift from my husband in 2009.

As a boarded veterinary surgeon, I wanted a license plate to reflect my alumna status at ISU and also my love for all things surgical. The license plate was my incentive to study for and pass my surgery board exam. "I incise" refers to making a surgical incision. My husband’s license plate reads I EXCYZ because he's a small animal veterinarian who performs many spays and neuters. We are probably the cheesiest veterinarians in the state, but we think our plates are pretty clever!

I have always been a big ISU fan. With my last name being Speicher ("Spiker"), the nickname Spike has followed me and many others in my family over the years. Mr. Spike is something a younger cousin would call me. Many spike-related themes had already been swooped up by other vehicle owners in the state. My buddies give me grief and call me MRS-PIKE from time to time. Oh well ...

It stands for "Please Neuter." [Before coming to Iowa State] I worked and volunteered at the Boone and Story County animal shelters, and I have been a long-time advocate of reducing pet overpopulation. I thought if my plate saved one litter, it would be worth it.

It reads "Cy Tennis." I am the coach of the women's tennis team at Iowa State. I like to promote our sport and our athletics department around town.

These plates were a birthday gift from my parents in high school. The message is short for "Got Agriculture?" because I was heavily involved in FFA and 4-H programs, serving as an FFA chapter president. I graduated in animal and dairy science (BS) and animal science (MS). I have always been an advocate for agriculture, and wanted to extend my passion for agriculture and Iowa State to my vehicle.

It's a reminder to laugh . . . often. When my husband convinced me to get vanity plates, I decided that I wanted to put something on them that would make people smile.  I hope LAFALOT does this. We receive so many blessings; why not smile and enjoy them?

I wanted a unique way to show that I am both a Cy fan and a fan of science so I came up with SCI FAN. My degrees from ISU are in the life sciences and I have worked as a scientist for more than 20 years. It also is a great way to show my support for the university!

We were trying to find a way to incorporate our last name on our plate. Everyone knows there aren't many Hansons in
Iowa . . . :) My wife came up with this idea.

It's short for "d20 roller" which relates to role-playing games, in particular Dungeons and Dragons. It means someone who rolls 20-sided dice (most role-playing games use polyhedral dice with more than six sides). So basically my license plate is a shout-out to other gaming nerds.

I debated what my plate should say and I wanted something appropriate. [ISU Alumni Association president] Jeff Johnson suggested [the Roman numeral] and I really liked it.

Since 2006, Wohlgemuth has held a joint appointment with Enrollment Services and the Office of the Senior Vice President and Provost, Budget and Planning. He leads the Enrollment Research Team, conducting research and analysis on a variety of enrollment issues, including pricing, budgeting and strategic recruitment.

Wohlgemuth holds master of science and doctoral degrees in economics from Iowa State University. He earned a bachelor's degree in secondary math education from the University of Kansas, Lawrence, and an associate's degree from Hesston College, Hesston, Kan.

External funding at Iowa State rose to $360.2 million in the fiscal year that ended June 30, an increase of $17.9 million over last year and the second highest total achieved by the university.

The external funding includes grants, contracts, gifts and cooperative agreements from federal, state and local government sources and from corporations, foundations and other universities.

The increase this fiscal year reverses a downward trend following a record high of $388.2 million in 2010 after federal stimulus programs expired, according to Sharron Quisenberry, vice president for research and economic development.

"I see this increase in funding over last year's total as a very positive sign for our university and state, especially given how competitive the environment has become for attracting these dollars," Quisenberry said. "First and foremost, it takes talent on the part of our faculty, researchers, staff and students to be successful in attracting this funding, and then it takes determination and persistence. I appreciate their efforts on behalf of Iowa State."

"The strength of Iowa State University's research enterprise is evident in our success in obtaining funding from external sources," said president Steven Leath. "This success is very important to the State of Iowa as we continue to build our research in areas critical to the state's economic future."