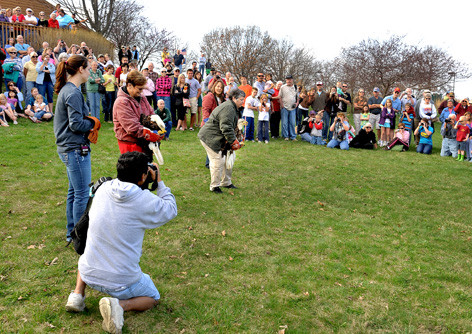 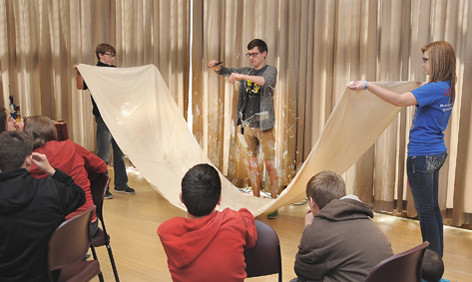 Sam Reeves, a senior in materials science, applies pliers to a sheet of glass in a shattering "cool science" demonstration for middle schoolers. Photo by Bob Elbert.

Approximately 260 sixth, seventh and eighth graders from 31 schools around the state were on campus March 28 to get their hands on new technologies and explore potential academic and career paths.

The students were participating in the Investigation Series, an annual event sponsored by ISU's Precollegiate Programs for Talented and Gifted (OPPTAG) office.  All ISU colleges participate in the conference, which is designed to expose students to careers in math, science, computer technology and creative arts.

OPPTAG has been providing programs for talented students for 26 years. Staff currently are gearing up for popular summer offerings.

Applications for the following programs are due in early spring. 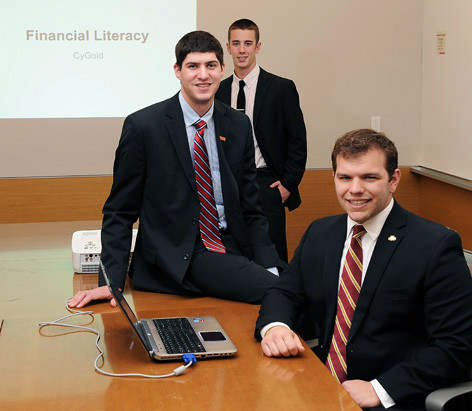 Dakota Hoben and Jared Knight made their intentions clear during their inauguration last spring as president and vice president, respectively, of the Government of the Student Body (GSB). GSB has been working to increase the university's financial literacy offerings, but the duo wanted students to take the debt-management fight directly to their fellow students.

The result: CyGold, a student organization focused on financial literacy peer education. The group was founded last fall and will begin making presentations in residence halls, fraternities and sororities this spring.

While Hoben and Knight are pleased that the average debt for last spring's graduates (with debt) fell below $30,000 for the first time in six years to $29,455, they hope to see that number continue to fall. And they see CyGold as an important variable.

"GSB and the university have been trying to align everything with curbing student debt," Knight said. "And while the Financial Counseling Clinic, the Office of Student Financial Aid and the Accounts Receivable Office have been doing some programming, we've never had a peer group that's actually gone out and talked to students where they live.

"It's previously been a matter of students getting into [debt] trouble and then getting help, instead of this preventative thing," he said.

"The peer-to-peer effort isn't a new idea. I think we're just finally getting to the implementation stage," Hoben said. "There's been a lot of work that was done before us to get these pieces aligned."

Three students from the CyGold team made a trial PowerPoint presentation to GSB's executive cabinet on March 7. It included:

The content was developed with the Office of Student Financial Aid.

"The students have taken all the information that we've talked about and they put it into one giant PowerPoint," said Jennifer Schroeder, an adviser in student financial aid who advises CyGold. "Their intention is that, based on the request that they get, they're going to use components of the presentation to address those specific topics. I think they're planning on about half an hour for each individual presentation."

There's already interest in it from student groups.

"I've contacted both the Interfraternity Council and the Collegiate Panhellenic Council presidents, and they've expressed interest in the group and spreading the word around their chapters," said Gregory Hunt, CyGold president and a freshman GSB senator. "I've also heard from other fraternity and sorority leaders, and maybe five or six community advisers within Friley Hall."

Hunt said he's making contact with other hall directors and community advisers to get the CyGold team on their hall meeting agendas.

Schroeder said there are plans to expand CyGold's visibility through a greater web presence and a Facebook page. They'll also have a CyGold email address that students can use to request a session.

Hunt also has ideas of how the program may expand over his four years on campus.

"I guess my supreme goal -- the dream that is in my head right now -- is to eventually get to the level of an academic tutor, but instead of academics, you're teaching financial literacy," Hunt said.

Hoben also would like to see CyGold eventually work in tandem with ISU's Financial Counseling Clinic, but offer a different kind of service.

"The counseling service is important, but those are the students who are already in trouble," Hoben said. "So this is going to focus more on the preventative side and the education side, and I think that's important."

Pitching in for a better community 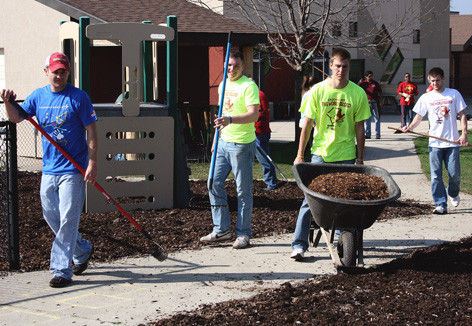 Iowa State students install fresh mulch at the University Community Childcare Center March 24 as part of annual Stash the Trash/Veishea Service Day activities. Director of sustainability Merry Rankin said more than 2,000 volunteers, including a large representation of Iowa State students, pitched in at dozens of sites around Ames. They got a surprise assist from two busloads of students from St. Olaf College, Northfield, Minn., who were northbound after a spring break week spent helping with tornado cleanup in Joplin, Mo. Photo by Corrin Hatala.

You've kept track of your medical and dependent care expenses all year. Now it's time to reap the benefits of your efforts, if you haven't already done so.

You must file health care and dependent care flexible spending account claims by April 30 to receive reimbursements for your 2011 eligible expenses. If you miss the deadline, you'll lose any unclaimed money that was deducted from your paycheck to cover qualified expenses in 2011.

Reimbursement claim forms (PDF) for 2011 are available online through Wellmark. First-time users should click "New User" to create a username and password. Past users should make sure that any of their saved claim forms have Wellmark's latest address and fax number:

Call the following numbers if you have additional questions: 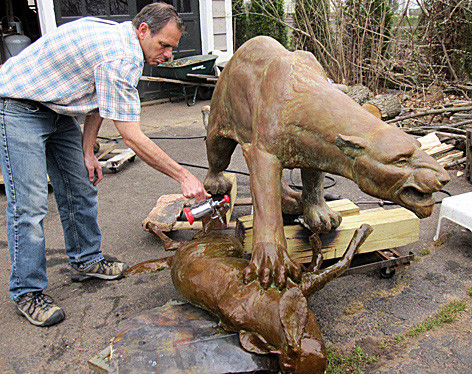 Art conservator Francis Miller works on restoring a bronze patina to one of the panther sculptures last week outside his studio in Hamden, Conn. Photo by Lynette Pohlman.

It began in the mid-1990s with a broad inquiry into former artist in residence Christian Petersen’s early portfolio, in anticipation of a Petersen retrospective in 2000. It ended – sort of – years and thousands of search hours later on a day in June 2010 when University Museums director Lynette Pohlman searched the website of Middlebury College in Middlebury, Vt.

Voilà! Pictured there was the pair of slightly larger-than-life-sized bronze panthers created by Petersen sometime after 1920. They initially were installed for several decades on stone columns marking an entrance to a private estate near Narragansett, R.I. During her search, she learned they changed hands several times before being donated in 2001 to Middlebury College, whose mascot is a panther.

Aided by private gifts and her goal to develop the world's largest repository of Petersen art, Pohlman successfully negotiated with Middlebury administrators to purchase the sculptures. Last fall, they were removed from that campus and sent to the Connecticut studio of art conservator Francis Miller. He is cleaning them and restoring Petersen’s original bronze patina as well as he can. Pohlman said decades of weather and oxidation produced a green patina that can’t be removed completely. A semiannual waxing of the sculptures in the future will protect the bronze patina, she said.

The university community will get its first look at Petersen's Panthers on Veishea Saturday. Following a trot through the Veishea parade, the sculptures will be installed in the section of the Anderson Sculpture Garden that's east of Morrill Hall.

"Sleuthing" story to be shared April 1

Pohlman and museums guest curator Lea DeLong are just back from a trip east to check up on the panthers and continue to dig for clues on when and for whom they were created. They uncovered some interesting possibilities, but their work isn't finished yet, Pohlman said.

DeLong – the author of four publications about Petersen and whom Pohlman calls a "wonderful research curator" -- will share the story of University Museums' search for the panthers and efforts to own them during a museum talk (PDF) this Sunday, April 1 (2-3 p.m., 1017 Morrill Hall). Her talk is free and open to the public.

"Hers is a sleuthing story," Pohlman said. "I tend to be a more intuitive curator; Lea digs for the facts that prove the story."

Pohlman said the extended search for Petersen's felines is not unprecedented in University Museums. There have been other lengthy efforts to locate specific pieces, she said.

But what is it about the panthers – pieces seemingly out of character with much of the art Petersen created at Iowa State – that compelled their long investigation?

"Because he went from being a jeweler and making rings to doing very expressive sculptures," Pohlman said. "To the best of our knowledge, these panthers are the beginning of that great leap."