Bringing back the magic 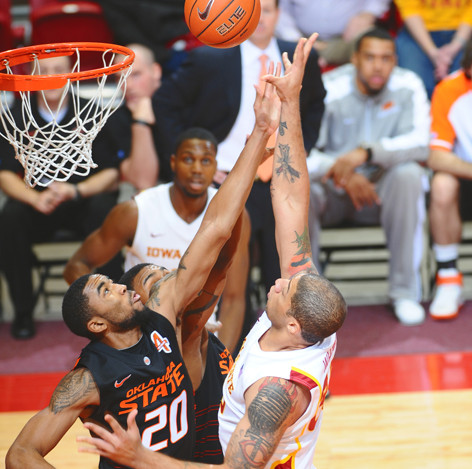 Despite being picked eighth in the 10-team preseason Big 12 Conference rankings, the Iowa State men's basketball team currently sits at fourth as league play nears the halfway mark. Sophomore Royce White (pictured) has earned Big 12 Rookie of the Week honors twice this season, and recorded the fourth triple-double (points, rebounds, assists) in school history during ISU's Jan. 7 win at Texas A&M. The Cyclones return to Hilton Coliseum for a two-game home stand against long-time conference foes No. 5 Kansas (Jan. 28, 1 p.m.) and No. 22 Kansas State (Jan. 31, 8 p.m.). The KU game is sold out, but a two-for-one ticket ($25) promotion for the Kansas State game is available through Jan. 30. Photo courtesy of ISU Athletics Communications.

How undergraduate tuition gets distributed, strategies for consistent funding of deferred maintenance, and how to share the indirect costs recovered from research projects. Following a fall semester spent listening, these are three of the issues selected for review and recommendations by the committee asked to assess the effectiveness of Iowa State's 3-year-old budget model.

Throughout the review process, employees are welcome to send their ideas for improving the RMM to: budgetmodel@iastate.edu. An alternate online submission form also is available and assures anonymity for those who want it.

Director of university budgets Dave Biedenbach said the goal is to send a draft report, with observations and recommendations, to executive vice president and provost Elizabeth Hoffman by the first week in March. In addition to Hoffman, the committee's intent is that vice presidents, college deans, the Faculty Senate and Professional and Scientific Council would have about a month to review the draft. Input from these individuals and representative groups would be used for the review committee’s final report, expected to be completed by May 1.

The 10-member review committee is co-chaired by Liberal Arts and Sciences associate dean Arne Hallam and Business dean Labh Hira. Working in small groups, committee members are focusing their efforts this month and next on these issues:

Biedenbach said representatives from the Faculty Senate and P&S Council concurred with the eight-item list before the committee proceeded with its work.

Iowa State units first used the model -- known as the Resource Management Model (RMM) -- to build budgets for the fiscal year that ended June 30, 2009. The committee that adapted and led its implementation recommended a review of the model after three to five years of use.

The review committee hired Resource Planning and Management Associates, Nashville, to lead the information gathering during fall semester. The listening phase included a symposium in late September and interviews and focus groups with employees during October and November.

Biedenbach said the consultant will continue in an advisory capacity this semester. "We'll use them as a sounding board. Are we addressing what they heard last fall?" he said.

With one exception, state operating support for the university would remain flat under Gov. Terry Branstad's proposed budget for the fiscal year that begins July 1. Branstad released his budget Jan. 12, indicating to Iowans, particularly Iowa legislators, his priorities for FY13 and the kinds of legislation he is likely to support this spring.

Branstad did propose an additional, recurring $20 million for the Board of Regents, but didn't indicate how it should be shared among the regent institutions. Because of this uncertainty, no decision has been made yet on how any additional state funding to Iowa State would be distributed internally

In its funding request to the state in late September, university leaders sought a 4 percent increase to nearly all its appropriations. Director of university budgets Dave Biedenbach said the request reflects the Higher Education Price Index forecast for FY13, which shows a range of 2.6 to 4.2 percent and a median of 3.4 percent.

As proposed by Branstad, Iowa State would receive $216,625,997 in state funding again next year and, most likely, some portion of the $20 million. The university's current operating budget is about $535 million; its total budget, including sponsored research and auxiliary units such as athletics, printing, residence and dining, is about $1.1 billion.

Branstad also has $20.8 million in his proposed FY13 capital projects budget for the first year of construction on phase 2 of Iowa State's biorenewables complex south of the College of Design. Phase 2 provides two wings that will house the agricultural and biosystems engineering department and an atrium tying them to the first phase, the biorenewables research laboratory.

Biedenbach said planing for the university's FY13 budget continues to move forward. Iowa State anticipates an increase in tuition revenue as a result of the tuition increase approved in December by the regents (about 3.7 percent for resident students and 2.6 percent for nonresidents).

Other variables are starting to fall into place. For example, preliminary discussions are occurring now to set salary adjustment parameters for next year. That includes a minimum salary adjustment for all faculty and professional and scientific staff who receive satisfactory performance evaluations, as well as a maximum allowable adjustment, above which requires approval by the appropriate vice president. He said the goal is to decide on those parameters by mid-February.

The Iowa State community will celebrate its greenness -- past and future -- in a Feb. 28 event.

"Sustainapalooza: Celebrating our Cardinal, Gold and Green!" is a shorter version of the sustainability symposiums held the previous three years. It's planned for 4 to 6 p.m. in Memorial Union Great Hall. 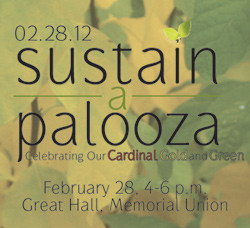 Students, faculty and staff are invited to join the event, which will feature interactive "empowering" stations, a poster reception and an opportunity to walk the "Live Green! carpet." Director of sustainability Merry Rankin and leaders from the university's Council on Sustainability and the student organization The Green Umbrella also will give brief remarks.

"At this event, we'll celebrate our accomplishments since 2008, when former president Gregory Geoffroy established Iowa State's Live Green! initiative," Rankin said.  "And we'll look forward as we continue our journey toward a sustainable future."

Student organizations, classes, researchers and others involved in sustainability projects are invited to share their work through a poster presentation, Rankin said.  Those interested in developing a presentation should contact Rankin by Jan. 31.

Sustainapalooza attendees will have an opportunity to get a little recognition for their own green deeds.

"Everyone attending will be invited to walk the Live Green! carpet, write their personal Live Green! contribution or commitment on the "Wall of Cardinal, Gold, and Green," and receive a sustainably minded and empowering gift in return," Rankin said.

In a promotional run-up to the event, members of The Green Umbrella student group will wander campus over the next few weeks, catching and photographing students, faculty, and staff committing green and sustainable acts. Rewardable acts might include carrying reusable water bottles, putting newspapers in recycling bins, or riding buses or bikes, Rankin said.

Sustainapalooza is sponsored by the Live Green! initiative, the university-wide Council on Sustainability and The Green Umbrella, which coordinates events and collaboration among sustainability-minded student groups.

The majority of Iowa State employees are healthy nonsmokers who are willing to take some financial risk and have a solid understanding of the value university benefits add to their total compensation.  That's the overall finding from the 2011 benefits survey conducted last March by the University Benefits Committee (UBC), human resource services (HRS) and the Research Institute for Studies in Education (RISE).

The purpose was to benchmark faculty, professional and scientific, and supervisory and confidential employees' satisfaction with the university's benefits, and to determine how knowledgeable they are about benefits generally, and ISU's plans specifically. (Merit employees' medical and dental benefits are managed through the State of Iowa collective bargaining plan, so those employees were not part of the survey.) The survey also asked employees about scenarios that could help control the cost of benefits.

Following is a look at some highlights from the survey results.

Healthy, for the most part

The survey showed that 95 percent of ISU employees consider themselves to be in good or excellent health, and only 3 percent are tobacco-users. However, 46 percent of the respondents admitted that their current weight is higher than it should be.  Mark Power, chair of the UBC, found those numbers interesting.

"The percentage of self-reporting smokers was much lower than we anticipated," Power said. "And while we self-report a high level of health, about 50 percent [of employees] consider themselves overweight."

Power said one obvious solution would be to offer employees a comprehensive wellness program. But start-up costs and the return on investment for wellness programming is an issue. New programs often take three or more years to show positive savings.

"A wellness program could cost about $500,000 annually, and that's the low end," Power said. "We have a responsibility to look at wellness and start a program if feasible because it will help us control costs over the long run. The problem is start-up costs."

Iowa State employees understand the importance of preventative care, according to the survey. During the most recent plan year (2010-11), 73 percent of employees had a physical exam, 90 percent had a dental preventative exam and cleaning, 70 percent had an eye exam and 56 percent received at least one immunization.

"We have a population very attuned to preventative services," Power said. "That was positive."

Employees were asked to rank the university's most important benefits. Following are the results, from most to least important:

The survey indicates employees understand the value of the university's benefits, and that future changes should impact those benefits that are inexpensive and used the least. The issue, according to Power, is that the changes employees are most willing to accept would generate the least overall cost savings for the university.

Though more statistical analysis is forthcoming, the survey showed male respondents seem to be more knowledgeable about general benefit terms than female respondents. The survey also indicated that as employees age and their length of service increases, their benefits knowledge also increases. Employees have a solid understanding of common financial services, including mutual funds, IRAs, savings accounts and traditional benefits (medical, dental, prescription). Faculty are the most knowledgeable about general benefit terms.

With the benefits survey data in hand, ISU now has a foundation on which to make future benefits decisions.

"Going forward, it's very important to do a more detailed statistical analysis of the survey to make our benefits stronger," Power said. "If we do have to make changes to our benefits program, we'll have the information we need." 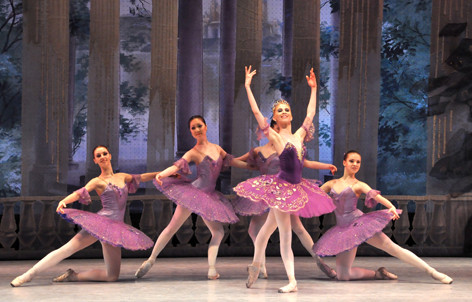 The Moscow Festival Ballet brings The Sleeping Beauty fairytale to Stephens Auditorium Jan. 29. A cast of 50 dancers performs to Tchaikovsky's music, with dramatic costumes, scenery and lighting. The full-length ballet tells the story of Princess Aurora and Prince Charming, and the battle of good vs. evil. Aurora is cursed at her christening by the evil Fairy Carabosse, but saved from death by the benevolent Lilac Fairy. On the princess' 16th birthday, Carabosse -- disguised as a stranger -- offers a gift that sends the princess and the kingdom into a deep slumber. A century later, Prince Charming is captivated by a vision of Aurora shown to him by the Lilac Fairy. He follows the fairy to the enchanted kingdom hidden behind a dense forest of thorns. A magic kiss leads to a joyous awakening and a wedding with guests recognizable from many popular fairy tales. The three-act performance begins at 3 p.m. Tickets, available through Ticketmaster or the Stephens box office, are $34-$38 for adults, $25 for youth and $20 for ISU students. Submitted photo.

The Sleeping Beauty, a classic ballet featuring music by Tchaikovsky, will be performed by the Moscow Festival Ballet Jan. 29 at Stephens Auditorium.