Iowa Staters make their way across central campus near Morrill Hall Monday as the snowfall intensified. More than six inches fell during the day, one of mid-Iowa's largest snowfalls in the last couple of years. Take heart: Spring break arrives in about four weeks. 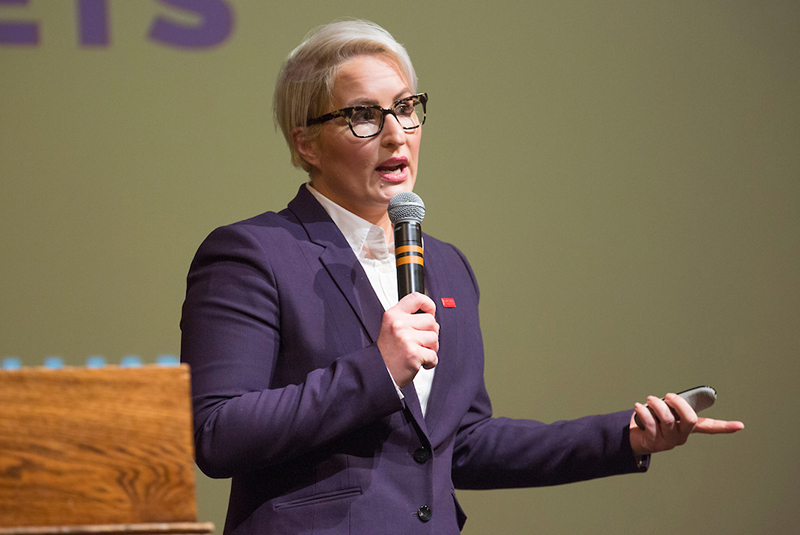 Closing the achievement gap for Iowa State's underrepresented, first-generation or low-income students wouldn't require "astronomical" numbers, learned participants at a campus symposium Feb. 5. About 150 faculty, staff and administrators attended the symposium, a starting point for assessing and eliminating the student retention and graduation disparity that exists by race, socio-economic status and other variables. The project is one Iowa State is taking on as a member of the University Innovation Alliance.

For example, retaining three more underrepresented students from the fall 2010 freshman class for their sophomore year, 24 more for their junior year and graduating 37 more after six years would have moved their progression rates within five percentage points of their white peers. Five percent is the "closing" goal. Even so, 37 students is nearly 12 percent of underrepresented freshmen in fall 2010.

To bring underrepresented students' six-year graduation rate even with white students, 56 more from the fall 2010 class would have needed to graduate.

As President Wendy Wintersteen noted in her comments at the end of the day, "We have a long way to go, but we also learned there's an advantage to small numbers."

Matthew Pistilli, director of student affairs assessment and research, presented data that laid out where Iowa State is now. In about 25 minutes and 100 slides, he covered retention and graduation rates for underrepresented students at Iowa State, the status of programs and projects that support them, and how far the university needs to "move the needle" to help more students successfully graduate. Amanda DeGraff, assistant director in the office of institutional research, also produced the report.

Closing the gap for either first-generation students or non-Pell eligible students, Pistilli said, would require retaining 22 more per year from either group over the six-year period. After six years, Iowa State also would have graduated an additional 120 students in each student group. The cumulative effect of that, he noted, also helps the university's bottom line. Retaining more students provides more resources to invest in their success.

Pistilli said the most precipitous student attrition consistently occurs after the sophomore year.

"The challenge, it seems, is getting students into the third year of study -- at which point attrition becomes relatively small and success seems to increase," he said.

Support hasn't kept up with growth

He also cited support programs such as learning communities, multicultural liaison officers and other discipline-specific efforts already in place.

"The challenge for us isn't knowing what to do. It's figuring out how to scale what we have," Pistilli said.

The research offices at Iowa State and the University of Iowa have partnered to offer seed grants for collaborative work between the two schools.

The Building ISU-UI Research Partnerships Seed Grant Program offers up to $50,000 per project over two years to interdisciplinary teams studying the areas of antimicrobial resistance, brain science, vaccines and immunotherapies, and medical devices. The intent is to spark collaborative team projects that attract sponsored funding from federal agencies, while raising the research profiles at both institutions.

The new seed grant is one of 15 internal funding programs offered by the vice president for research office. The funding opportunities aimed at helping faculty advance their research careers range from new interdisciplinary research to cost-share for research instrumentation and open access publications.

An overview of the programs (PDF) is available on the research office's Grants Hub website. Submissions do not require GoldSheet or Cardinal Sheet forms required for external grant applications.

Internal funding is available for research in all disciplines. Several programs were created exclusively for interdisciplinary projects:

The interdisciplinary grants are only part of the diverse pool of internal funds available to researchers. The Center for Excellence in the Arts and Humanities offers three grants -- up to $10,000 or $15,000 each -- to support planning, research and symposium in the arts and humanities. The Bailey Research Career Development Award -- up to $50,000 annually for three years -- funds innovative research in emerging fields, with practical applications.

Senior vice president and provost Jonathan Wickert told the Professional and Scientific Council at its Feb. 1 meeting that the Iowa Senate's Jan. 25 proposal to cut an additional $6.9 million from Iowa State's state operating appropriations was "surprising" and seemed to target higher education in a "very clear and direct way."

The Senate proposal, which comes on top of an $11.5 million cut in state funding last fiscal year, may push ISU to its financial limits, Wickert said.

Wickert said Iowa State and the other regent universities plan for funding shortfalls, but the negative impact of slashing almost $7 million from Iowa State's budget nearly three-quarters into FY18 is burdensome.

"This is what really makes this difficult and very negative and almost cruel -- and I choose that word specifically -- because most of the [fiscal] year is already over," he said. "There are four quarters in a year and we really won't know until March what they are going to do, then you only have that next quarter between March and July 1 to be able to handle it."

Wickert urged councilors to contact state legislators and convey the "remarkable return on investment" the state of Iowa and its taxpayers receive for every dollar that supports Iowa State.

"I think it's important we make a powerful statement that further cuts to our institution, as well as the sister regent institutions, will start to cut down to the bone of our higher education system," he said.

Varieties semifinals are this weekend 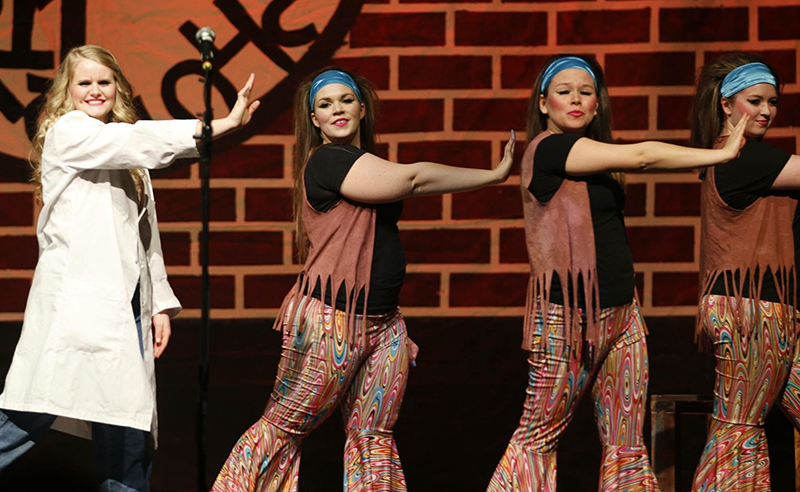 The 87th edition of "Varieties," Iowa State's annual student musical talent competition, will be held over two weekends this month in the Memorial Union Great Hall.

Varieties shows last about two hours and include a set of mini-musicals alternating with vignettes, all pulled together and introduced by emcee teams of two or three people. ISU students compete in all three categories.

Musicals are up to 22 minutes long and feature original lyrics and choreography performed by groups of 30 to 60 students. Vignettes, with a time limit of 10 minutes, showcase a wide range of student talents, from comedy to juggling, dancing and singing.

Large groups, vignettes and emcees will compete both nights of the semifinals. The top four mini-musicals, top four vignettes and top two emcees advance to compete at finals.

"Step Into Stardom" is the theme this year and contestants will find ways to incorporate it into their performances.

Semifinals tickets are $10 ($6 for ISU students). Finals tickets are $14 (ISU students $8). A $4 ticket discount also is available for groups of 10 or more and youth 18 years and younger. Purchase tickets at midwestix.com, or in the MU Maintenance Shop box office and by phone (294-8349), weekdays 11 a.m.-5 p.m. An additional service fee applies to telephone and online orders. 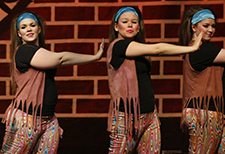