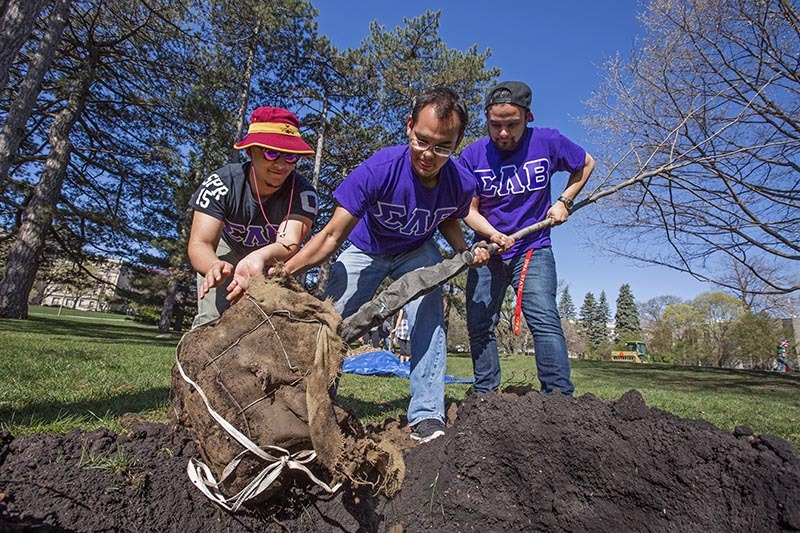 From left, David Ortiz, Raul Hernandez and Erik Ortega prepare a butternut tree for planting Monday on central campus. They are members of Sigma Lambda Beta fraternity and partnered with the Green Umbrella student organization to help plant trees in celebration of Earth Month. Photo by Christopher Gannon.

Rhonda Martin, landscape architect in facilities planning and management, said FPM staff select the tree varieties that will be added to the campus canopy.

"While we prefer to plant native species, we also will introduce other species on campus for use in class instruction," Martin said.

She said this week's planting, south of LeBaron Hall and the Border Crossing sculpture, doubles the number of butternut trees on campus. Also known as white walnut trees, about 90 percent of Iowa's butternuts have been killed off by a fungus "canker" disease over the last 40 years. Healthy butternuts can grow up to 60 feet and live more than 80 years.

Next week's planting is west of the Campanile. The Arbor Day event, scheduled for 1 p.m. on April 25, will include a short program in which associate professor and interim landscape architecture chair Carl Rogers will read an Arbor Day proclamation statement. Martin said there are only a handful of American beech trees on campus. They have smooth, silver bark and can grow up to 120 feet and live 80 to 100 years.

Long-serving nontenure-eligible (NTE) faculty now can be honored with emeritus status after Faculty Handbook changes unanimously were approved at the April 18 Faculty Senate meeting. The policy requires at least 10 years of service at Iowa State and uses the same criteria for the nomination and review of tenured faculty.

The policy change stemmed from a set of recommendations in a report compiled by a Faculty Senate task force charged with studying the status of NTE faculty.

Student-athletes in the classroom

Tim Day, professor of biomedical sciences and ISU's NCAA-mandated faculty athletics representative, gave his annual report on the academic performance of Cyclone student-athletes. As in past years, their overall grade point average closely mirrored the student body GPA. In the 2016 spring (3.04) and fall (2.99) semesters, the student-athlete GPA was slightly higher than the overall student body (2.99 and 2.97, respectively).

"This year, football will post its best number ever, which is really remarkable in light of the fact that there was a coaching change," Day said. 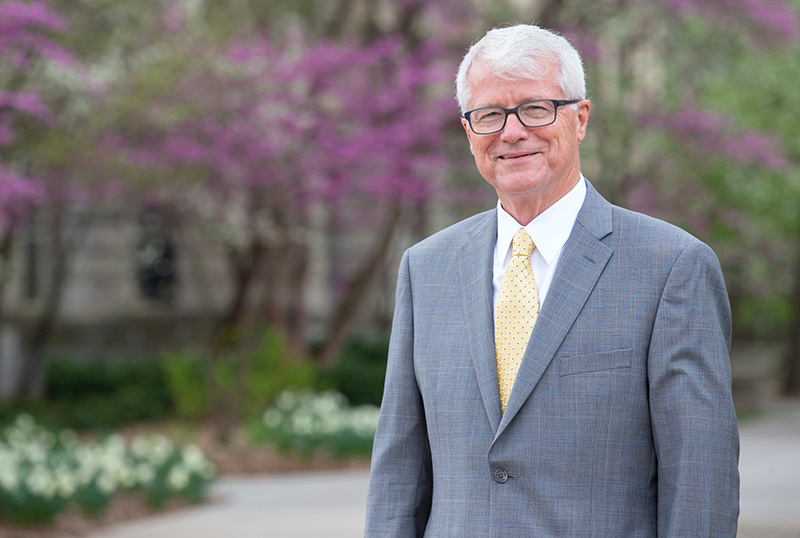 Former Iowa Stater Ben Allen returned to campus April 17 as part of the presidential transition. He is serving as a senior policy adviser to President Steven Leath through May 8, and assumes the interim president role on May 9. He'll remain in that leadership role until Iowa State's next president arrives.

Allen said he is meeting with as many faculty, staff and student groups as he can these first three weeks to learn about key issues for the university and to "keep Iowa State on a positive trajectory" until the next president is selected.

Allen spent 27 years as an Iowa State faculty member and administrator. He joined the transportation and logistics faculty in 1979 and became department chair in 1984. He served as interim dean (1994) and the third dean (1995-2001) of the College of Business. He was the college's first Distinguished Professor (1988). He was interim vice president for external affairs (2001-02) and vice president for academic affairs and provost (2002-06). He left Iowa State to serve as president at the University of Northern Iowa, the position he retired from in 2013.

Raise your hand if you have too many passwords. On campus, that soon will change thanks to a contract the university signed earlier this year with Okta, an identity and access technology company that will help ISU create a secure, single sign-on platform for users to access university systems.

Once signed on to the Okta platform, users are just a click away from applications such as Outlook, CyMail or Cybox -- without navigating another login screen. Chief information security officer David Cotton said users will have a unique identifier to initially log into Okta, such as their ISU email address.

"People may have a dozen or more passwords to remember right now," Cotton said. "The identity and access management interface will give you a portal to access the major systems you use today, as well as those that may be added in the future. The goal is to streamline the user experience while providing the appropriate level of protection."

Cotton said the Okta platform will be rolled out in phases over the summer and fall, with careful consideration of activities and campus community input to develop a detailed implementation schedule. The first phase will focus on access to services common to students, faculty and staff, such as Microsoft applications, CyMail and Cybox.

Okta's identity and access management platform also will, in essence, create a virtual security barrier and protect most of the university-wide (enterprise) systems -- including the Workday finance, human capital management, payroll and student information systems.

"Okta and associated efforts, such as a forthcoming password change campaign, ensure Iowa State is compliant with the Board of Regents’ information technology security policy -- authentication systems that support password length, complexity and renewal requirements -- and any requirements for use of multifactor authentication," Cotton said.

The Iowa State Veterans Center is planning additional Gold Star faculty and staff training for fall semester. To find out when the sessions are scheduled or to stay informed about additional veterans events, sign up on the center's website or email veteranscenter@iastate.edu.

To help Iowa State employees better support the unique needs of military students, the Iowa State Veterans Center has launched Gold Star faculty and staff training. The hour-long session, led by veterans center director Jathan Chicoine, covers some of the challenges student veterans and individuals from military families face, and how the university community can ease the transition from military to civilian life.

Chicoine said some of the challenges student veterans and other military students face include:

Faculty and staff who suspect a student may be having suicidal thoughts should encourage that student to contact the National Suicide Prevention Hotline, (800) 273-8255, or call 911 if a student is in immediate danger of harming himself or herself.

Chicoine said it's important to remember that not all veterans and military personnel experience PTSD or TBI. He added that faculty and staff should be aware that a family member may experience secondary trauma after hearing details of a traumatic experience faced by their loved one. Not all deployments are traumatic, he said.

Chicoine said there are several ways faculty and staff can assist student veterans:

"It takes a collaboration of effort from all of us to provide the best support possible," Chicoine said.

Iowa State is participating in a national violence prevention program that focuses on awareness and bystander training through workshops and education. Faculty and staff volunteers are needed to serve as facilitators for the campus-wide initiative that's based on curriculum developed by the Green Dot etc. nonprofit organization.

Interim dean of students Keith Robinder said Green Dot was selected because of its evidence-based approach to ending sexual violence.

"The emphasis on student engagement and bystander intervention is a great fit for the culture of student involvement at Iowa State," said Robinder, who chairs the sexual misconduct leadership committee.

Faculty and staff can volunteer as facilitators for ISU's Green Dot program, which includes a commitment to 40 hours of training (eight hours daily), July 10-14. Once certified by Green Dot, facilitators will help implement the program on campus in several ways, including:

Volunteers are expected to facilitate at least two presentations to campus groups, organizations or units each semester as their schedules allow -- about eight to 20 hours per academic year. Quarterly development sessions also are provided for facilitators. Training is free of charge.

Faculty and staff interested in volunteering to become a facilitator can email greendot@iastate.edu or call 294-1020 by June 23.

The play opens with Prospero (Jane Cox, professor of music and theatre) and his daughter, Miranda (sophomore Ashley Diaz) on an island, watching a ship struggling to stay afloat in the midst of a storm purposely created by Prospero's magic. He reveals to his daughter that the ship harbors those who betrayed him and stole his title -- Duke of Milan -- 12 years earlier. Prospero explains that at the same time, he and she were set adrift on a raft in the sea, eventually landing on the island where they now reside.

Tales of romance, betrayal, sibling hatred and the love of a father for his child prevail throughout the rest of the play. And as is typical for Shakespearean romances and comedies, all is well that ends well.

ISU Theatre's portrayal of "The Tempest" is true to Shakespeare's original 1611 play, with a few cuts here and there.

"We're fundamentally trying to answer the question of what Shakespeare has to say to us today -- how the language and characters and themes remain relevant and potent," said assistant professor and production director Amanda Petefish-Schrag. "We've tried to retain the vast majority of what we think Shakespeare intended."

"Providing opportunities for students to work alongside faculty members in an acting company is a practice many universities incorporate on occasion, as it gives students a chance to work with professional, experienced actors, who also happen to teach them in the classroom," Petefish-Schrag said. "It's a tremendous opportunity to learn and grow from those interactions in a practical setting -- the theater equivalent of the laboratory."

Tickets, $18 for adults ($11 for students), are available at the Stephens ticket office, through Ticketmaster or in Fisher Theater prior to the performances.

'The Tempest' is final curtain

ISU Theatre wraps up its season beginning tonight with "The Tempest."