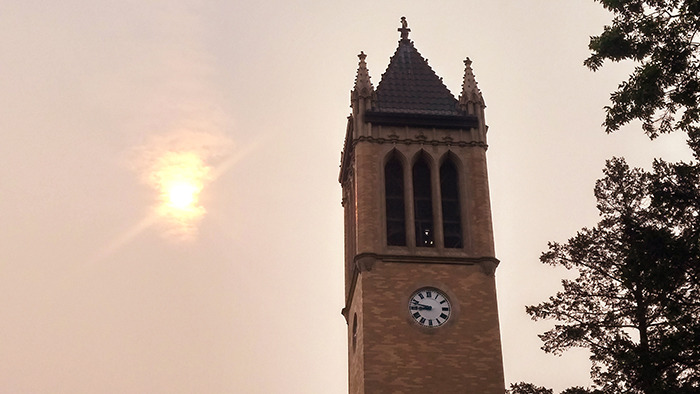 A view of the haze-filtered sun during the morning hours on Monday. Photo by Dave Olson.

When you step outside, it's like seeing the world through rose-colored glasses. The air patterns flowing south through the Midwest are bringing lofted smoke from wildfires burning in Canada. That upper air haze acts like a color filter for spectacular photos of the phenomenon.

"The sun emits energy at all colors," said Daryl Herzmann, an assistant scientist in agronomy and coordinator of the Iowa Environmental Mesonet project. "The smoke scatters the blues out of the sunlight and we're left with the red shades. It has to do with the particle sizes."

Herzmann said the conditions will last as long as the air pattern continues to dip south out of Canada. He said the visual effects are not limited to the outdoors.

"When the filtered sunlight is refracted through objects, like windows, you may see some interesting patterns appear within your house as a result," he said.

Iowa State will begin a five-year agreement with Ames-based VenuWorks on Aug. 1. VenuWorks will manage all events, conferences, catering and concessions at the Iowa State Center.

"We want to thank SMG for the service they have provided over the years, and look forward to working with VenuWorks for a seamless transition during the coming months," said Warren Madden, senior vice president for business and finance.

With the contract ending, ISU sought bids earlier this year, Madden said. A university committee reviewed proposals from both SMG and VenuWorks.

“VenuWorks was selected based on the financial terms, its vision for the future, and expanded opportunities for ISU students,” Madden said.

VenuWorks will assume all food and beverage services for Scheman, Stephens and Fisher, which has been handled by ISU Dining. In the short term, VenuWorks plans to expand internships for hospitality management students and performance opportunities for ISU theater and music ensembles. Long-term, the goal is to renovate and expand the Iowa State Center.

“Those elements will take years of planning and development with the university, but we are confident our team has the experience, expertise and financial strength to realize these goals,” said Steve Peters, president and owner of VenuWorks. “We are thrilled to work with the ISU community to help shape the future of the Iowa State Center.”

The management change does not affect the adjacent Hilton Coliseum, which has been operated by the athletics department since 2008.

Mark North, general manager of the Iowa State Center, will leave his position effective July 31. A new manager will be named within the next 60 days. VenuWorks plans to retain all other Iowa State Center employees.

“The people who make events happen every day are our most valuable resource,” Peters said. “We will be inviting current staff to join our company, with the hope they will want to continue their careers with us.”

Peters founded VenuWorks in 1996. The company operates arenas, stadiums, theaters, amphitheaters, convention centers, museums and galleries in 12 states. Among more than 50 facilities managed by VenuWorks are the TDECU Stadium at the University of Houston, the Ford Center in Evansville, Indiana; the U.S. Cellular Center in Cedar Rapids, the Alerus Center in Grand Forks, North Dakota; the Topeka Performing Arts Center, Kansas; Adler Theatre in Davenport and Hoyt Sherman Place in Des Moines.

The cast stones have arrived from an Omaha fabricator so work can proceed in earnest to construct an engraved 3.5-foot-tall wall on Union Drive opposite the Memorial Union. 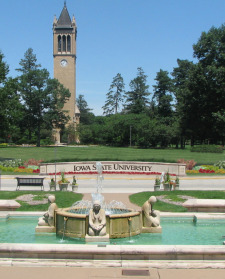 An altered image of the Iowa State University Wall, situated between the Fountain of the Four Seasons (foreground) and the campanile. Photo courtesy of facilities planning and management.

In a heavily traveled part of campus, the wall literally will put a name on the place. The curved 43-foot-wide wall will contain the "Iowa State University" nameplate in 14-inch engraved and shaded letters. The project also includes a disc of colored pavement between the sidewalk and the wall, a front bed of annual flowers and back landscaping of flowering shrubs and perennial flowers. From sunset to sunrise, the wall will be illuminated by ground lights.

Wall construction is scheduled for completion by July 31, with landscaping installed by Aug. 10.

Located between two Iowa State icons -- the campanile and Christian Petersen's Fountain of the Four Seasons sculpture -- the Iowa State University Wall may join them someday as 'most beloved spots to take a photograph.'

"We don't have any place on central campus that identifies Iowa State University," said associate vice president for facilities Dave Miller, who proposed the idea for the wall. "I think this could become something that will be in every university calendar, where students and alumni will want their picture taken."

The wall project is part of a three-year (FY14-16), $3 million campus beautification effort requested by President Steven Leath. The funds will be distributed among projects to improve building entries (for example, Gilman and Curtiss halls), first-floor hallways (Physics, Carver), landscaping and tree trimming (Beardshear, Carver plaza) and gathering/meeting spaces. It also will fund several special high-impact projects, of which the wall and this summer's Hub plaza are examples. Projects vary in size from $25,000 to $270,000. The budget for the wall project, which involved relocating a fire hydrant, is $170,000.

Some of next year's beautification funds will be used to enhance the north lawn of the Memorial Union, and Miller said the wall project will tie in to new paved areas, seating and landscaping across Union Drive when that work wraps up next summer.

Six years ago, Iowa State launched a program to encourage colleges and departments to make energy-saving improvements. The Live Green Loan Fund offers units interest-free loans for energy-saving projects that pay for themselves in five years or less.

The fund has proved popular, says director of sustainability Merry Rankin. It has funded or partially funded such green efforts as:

More than 20 proposals have been submitted for Live Green loans so far, with 13 receiving funding. For proposals that didn't receive loan funds, Rankin said officials were able to identify other options for completing the projects.

Because the loan fund is a revolving fund, loan paybacks are available immediately for new green projects and proposals can be reviewed and awarded on an ongoing basis, Rankin said. She encourages faculty and staff to consider how they might use a little upfront funding.

"The loans can help departments increase their sustainability efforts and commitment, ensure more efficient, effective operations and services and reap the benefits and savings for years to come. Look around in almost any department and you're likely to find some worthy projects," she said.

"Lights and occupancy sensors are low-hanging fruit. For a relatively modest investment, you often can save a lot of money with a quick return on investment."

Rankin said she and other facilities planning and management staff are available to consult on potential Live Green Loan projects.

The loan application process is outlined on the Live Green Loan site. The Live Green! Loan Fund Advisory Committee makes recommendations on proposals, based on analyses of the costs and payback and the money available in the Live Green Loan fund at any given time. The million-dollar fund ebbs and flows as loans are dispensed and repaid, Rankin said.

Summer enrollment at Iowa State reached a record-setting 11,636 students this year, an increase of 106 students over the previous record set in 2014. The census day for summer term enrollment is the 10th day of summer session two, this year Friday, June 26.

Broken down by student group:

Enjoy the Fourth at the Farm House 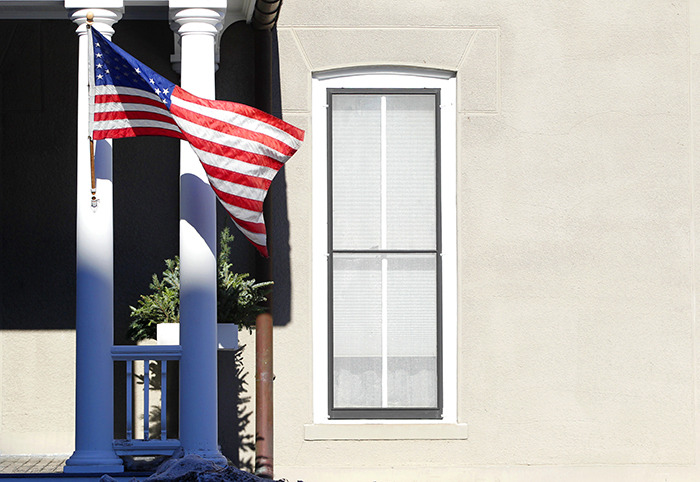 If you're looking for a Fourth of July celebration that's light on asphalt, consider coming to central campus.

University Museums is hosting an old fashioned Independence Day celebration at the Farm House Museum on Saturday, July 4 (noon-4 p.m.). In addition to the Fourth of July, the event celebrates 155 years of the oldest building on campus and its 40th year as a historic home museum.

The Farm House will be open for self-led tours, with museum staff present to answer questions. Lemonade and other light treats will be provided, and guests are welcome to bring a picnic for lunch on the lawn.

These activities are scheduled:

This event, free and open to the public, is part of University Museums' 40th anniversary celebration.