First day of the semester 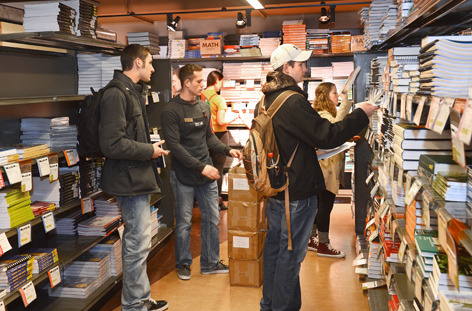 The University Book Store in the Memorial Union was a bustling place Monday as students shopped for their spring semester classes. Photo by Bob Elbert.

Reorganization of the university's economic development and company assistance programs accompanies the creation of a new Iowa State unit -- the Office of Economic Development and Industry Relations (EDIR).

"I am excited about the creation of this new office, which makes it easier for our external partners to connect with the university’s expertise and capabilities related to economic development and industry needs," President Steven Leath said. "It furthers our goals of being more accessible and more responsive, and most importantly, becoming an even greater contributor to the state, national and global economies."

Along with the new office, officials announced the appointment of statistics professor Sarah Nusser to vice president for research.

"Research and economic development are key priorities for Iowa State," Leath said. "We now have the organization and leaders in place to increase our impact in Iowa and beyond."

Crum, who began his appointment as senior policy adviser last August, said he has spent the past few months "trying to get my arms around everything we're doing on campus that contributes to economic development.

"It really is inspiring to see how much we're doing," he added. "Economic development activities occur all over campus. There are many opportunities for us, through better coordination and integration, to leverage these efforts and do even more."

Reporting to the new office

Crum said there are immediate plans to hire two staff members in EDIR.  Their primary responsibilities are related to serving and managing the relationships with external partners and stakeholders seeking the university's expertise and capabilities related to economic development.

Where to find EDIR and its units

In the future, the economic development and industry relations office and its units will be housed in a new building at the ISU Research Park. A state appropriations bill, signed into law last summer, will finance a $12 million facility to house university services and agencies that assist Iowa businesses. In the meantime, EDIR headquarters will be in Building 4 of the Research Park, and other EDIR units will remain in their current locations. To reach EDIR, contact Crum, 515-294-8105, mcrum@iastate.edu.

By Rob Schweers, Office of the Senior Vice President and Provost
January 16

Sarah Nusser, professor of statistics, has been appointed the next vice president for research. She will begin on Feb. 1.

"Sarah has an outstanding reputation as a scholar and administrator," said President Steven Leath. "I am confident she will grow both the size and impact of Iowa State's research programs, and enhance the visibility of this important piece of our land-grant mission."

"I am honored for this opportunity to serve my colleagues as Iowa State's next vice president for research," Nusser said. "I look forward to working with faculty and staff to increase the university's research capacity, create new funding opportunities, promote scholarship and the creative arts, and make it easier for investigators to submit grants and administer awards."

Nusser holds bachelor's and master's degrees in botany from the University of Wisconsin-Madison and North Carolina State University, respectively, and master's and doctorate degrees in statistics from Iowa State. Previously, she served as a statistician with the Proctor & Gamble Company in Cincinnati, and is a former director of Iowa State's Center for Survey Statistics and Methodology.

In making the announcement, senior vice president and provost Jonathan Wickert praised interim vice president David Oliver for his leadership of the university's research programs, and members of the search committee for their thoughtful consideration of candidates.

President Steven Leath meets today with President Barack Obama and other senior administration officials in an effort to identify ways to increase college opportunities for low-income and disadvantaged students.

Leath is participating in the White House event along with other college and university presidents and leaders from nonprofits, foundations, state governments and businesses from across the country. The event will be streamed live on www.whitehouse.gov/live.

"I greatly appreciate being asked by President Obama to take part in this event at the White House. We've discussed the importance of access to higher education, and I'm looking forward to offering insights from the perspective of a land-grant university where access and opportunity have always been a priority," Leath said.

One year ago, Leath met with students at Moulton and King elementary schools in Des Moines and urged them to take part in a special program designed to help low-income and minority students succeed academically and eventually enroll at Iowa State. Leath also is leading a five-year effort to raise an additional $150 million in private gifts for student financial aid.

In July 2012, Leath testified about college access and affordability before the U.S. Senate Committee on Health, Education, Labor and Pensions.

"Eliminating barriers to a college education will benefit our young people, our state and the nation. Iowa State is working to make that happen," Leath said.

Iowa State University strives to uphold the highest standards of research integrity. On occasion and despite our best efforts, those standards are compromised, and as you may have seen in the news over break, the actions of even one individual can have a significant impact.

As was reported in December, Dong-Pyou Han, a research assistant professor in the College of Veterinary Medicine’s department of biomedical sciences, was found to have engaged in research misconduct involving his vaccine work in Professor Michael Cho’s laboratory.

A few basic facts regarding the case are as follows:

While this news is disappointing to all of us at Iowa State, it does represent an opportunity to reaffirm our commitment to integrity -- in our research programs, and in everything we do.  It is also important to know that, when misconduct allegations arise, Iowa State has a responsibility to look into them and take them seriously.  Our system is designed to uncover the facts and provide due process for those involved.  All members of the university’s community should know about our policies for reporting, investigating and resolving allegations of research misconduct.  The policy is available at http://www.policy.iastate.edu/policy/research/misconduct.

Finally, we want to emphasize that discovering an incident of misconduct does not derail Iowa State’s high-quality research programs, nor does it detract from the outstanding research conducted by our faculty. We will continue to do work that benefits the state and people of Iowa, and addresses global challenges facing our society, in the best land-grant tradition.

Members of the Professional and Scientific Council will have to wait another month to find out who will be their next president-elect. Tera Lawson was announced as the winner of the three-way race at the Jan. 9 meeting, but further examination of the bylaws showed that a runoff is required if there is not a majority vote.

"I deeply regret the oversight," said council president Steve Mayberry, in an email to council members. "This situation has been discussed with the three candidates, expressing the need for full transparency of the matter and the need to correct the election."

A runoff election will be held during the Feb. 6 council meeting. Lawson (School of Education) will face the candidate who received the next highest vote count in the January ballot -- either Ann Greazel (ISU Extension and Outreach) or Mike Wilson (IT Services).

Kris Koerner, chair of the policies and procedures committee, told council members that Iowa State will waive the mandatory health fee for employees who are taking credits on campus, beginning this semester. The $98 fee is assessed on employees enrolled with four or more campus credits.

"It's been requested to be waived for [decades]," Koerner said. "This is not just for P&S staff and includes merit employees. We are grateful for that."

The P&S Council will host a professional development conference on April 17 in the Scheman Building. This year's event adds a resource fair.

Save the dates: A spring lectures preview

Topics covered in this spring's lectures series run the gamut, from black holes, to crisis management, to zombies. Several comedians also will take the stage in Ames, including David Koechner, best known as Champ Kind in the Anchorman films and Todd Packer on NBC's The Office. To learn about these and other upcoming lectures, check out the online lectures schedule. All lectures are free and open to the public.

Here's a look at some of this spring's lecture highlights.

Meg Urry is chair of the physics department at Yale University and director of the Yale Center for Astronomy and Astrophysics. She investigates the formation and evolution of the massive black holes that astrophysicists believe anchor each galaxy. Urry previously was a senior scientist at the Space Telescope Science Institute, which runs the Hubble Space Telescope for NASA.

Judy Smith, a crisis manager and former White House deputy press secretary for President George H.W. Bush, is the real-life inspiration for Olivia Pope, the lead character on ABC's Scandal, a drama about the life and work of a professional fixer. Smith's public relations and strategic communications career includes service as special counsel to the U.S. Attorney of the District of Columbia and corporate communications executive at NBC. She has counseled international heads of state, executives of major corporations and Hollywood celebrities. Smith will hold a book signing for her latest book, Good Self, Bad Self: How to Bounce Back from a Personal Crisis, following the lecture.

David Koechner is best known as Champ Kind in the Anchorman films and Todd Packer on NBC's The Office. He has performed with the casts of Second City Theater and Saturday Night Live. His other film credits include Waiting, Out Cold, Talladega Nights, Get Smart, Extract and Thank You for Smoking.

"That Horse has Stripes! How Zoos and Veterinarians are Helping to Save Wildlife," Joe Flanagan, April 21 (7 p.m., MU Great Hall)

ISU alum Joe Flanagan is chief veterinarian at the Houston Zoo, which is dedicated to conserving endangered species. At the zoo, he is responsible for the health of 6,000 animals, from invertebrates to great apes. His other conservation activities include providing medical care to sea turtles at the National Marine Fisheries Service, advising staff at the Galapagos National Park and the Charles Darwin Research Station, and extensive work with the U.S. Fish and Wildlife Service.

Cyclone Cinema starts its spring run this weekend with eight showings of Rush, a dramatization of the 1970s rivalry between Formula One racers Austrian Niki Lauda and Briton James Hunt.

The campus film series often catches titles between their theater and DVD releases and has grown in popularity. Student activities director George Micalone reports that Cyclone Cinema is averaging about 14,000 patrons each semester.

Sponsored by the Student Union Board with funding from Government of the Student Body, Cyclone Cinema will feature 14 titles with theater releases between September and earlier this month. Each movie runs for a weekend (Thursday through Sunday nights), with two showings a night (7 and 10 p.m.) in 101 Carver. Admission is free and the public is welcome.

But you may want to bring a few dollars for treats. Bottled water and Coke products are $1; candy and Ankeny-based Brandmeyer popcorn cost $2. You may pay with cash or CyCash at the concession stand. ISU students also may use their Dining Dollars.

*Two-night run due to start of spring break