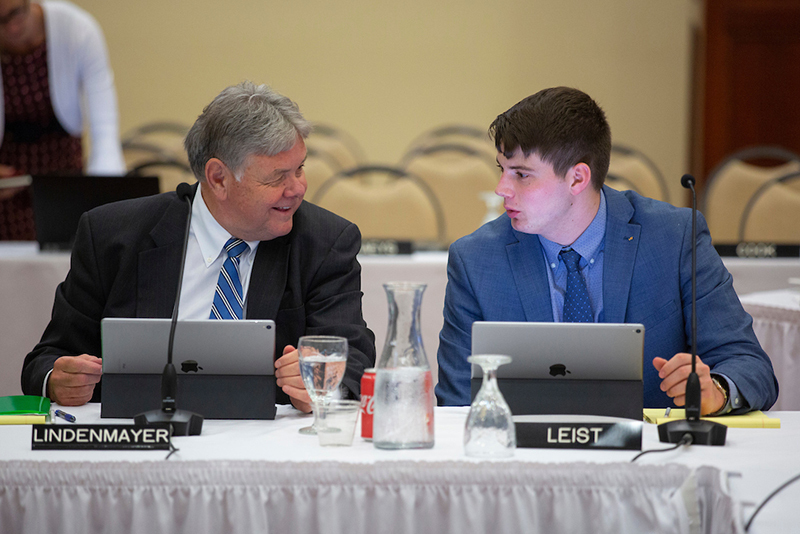 Iowa State junior Zack Leist ("leest"), who had plenty on his college plate prior to Gov. Kim Reynold's invitation last spring to fill the student vacancy on the nine-member state Board of Regents, said he's grateful for opportunities like this one.

"I like helping people, and this is that -- on a large, large scale," he said.

While one could argue he represents the 75,128 students at Iowa's three public universities, he sees it as serving 3.1 million Iowans.

"I know I come with a student perspective, but I have to look at what's good for the state, for the people of Iowa -- and that conflicts with what students expect sometimes," he noted.

Case in point: At Leist's first meeting in June, the regents approved tuition increases that were higher than hoped for but adhered to the board's guidelines based on state appropriations for the year. He actually was absent the day of the vote, but his Alpha Gamma Rho fraternity brothers gave him a hard time about the price hike.

Every generation deals with its own challenges and problems, he explained. He believes his experiences and perspective on issues such as technology, diversity and mental health will be useful to board discussions. Leist serves as vice chair of the board's campus and student affairs committee.

The Clarion native also sees board membership as "an opportunity to show that kids from small towns can do amazing things."

His penchant for pushing himself didn't start when he became a Cyclone two falls ago. Leist was student government vice president and valedictorian of Clarion-Goldfield-Dows High School's class of 2017. He competed in football, basketball, track and baseball all four years; the not-so-common "four by four" that keeps a student-athlete in season from roughly Aug. 15 to July 15. For two of those years, he had officer duties in the school's FFA chapter and, with classmates from the industrial tech club, twice raised funds to cover summer trips to Europe and Australia.

He helped organize events for his church's youth ministry team. He also helped at the family farm. His dad, Kelly, raises Angus beef cattle and grows row crops with his own father. His mom, Shannon (Cramer), is an Iowa State alumna and teaches family and consumer sciences at his high school. His sister, Hannah, completed an early childhood education degree last spring at the University of Northern Iowa (UNI).

Road to the regents

Leist's plan is to triple major in agricultural business, economics and international agriculture and try to pick up a minor in agronomy, as well. MBA and law degrees are possibilities when he finishes at Iowa State in May 2021, about the same time his regent term expires. He's completing the six-year term of former UNI student and regent Rachael Johnson.

In fact, they were in Brazil last spring when associate teaching professor in economics Kevin Kimle first raised the student regent vacancy with him.

"Our travel course is project-based, so I had the opportunity to observe Zack interact with U.S. and Brazilian agribusiness professionals and farmers as well as other students on the project team," Kimle said. "He demonstrated curiosity, an ability to formulate penetrating questions, and a capacity to listen effectively and connect to people. These traits all provide a foundation for leadership."

When they returned to Ames, Leist interviewed with President Wendy Wintersteen, then board executive director Mark Braun and finally the governor's chief of staff. Reynolds phoned to ask him to fill the vacancy on the board, which has requirements for gender and political balance. Leist is independent. The student seat also rotates among the three regent universities.

With three meetings and a fall retreat in the rear view, Leist said he's meeting great people and learning a lot about how the universities run. His dad's advice to him, "Don’t be a one-hit wonder," reminds him to use his opportunities to improve himself.

"My goals and dreams probably change every day," he said. "But I can be kind and genuine and work hard every day. And that gets you where you want to go."