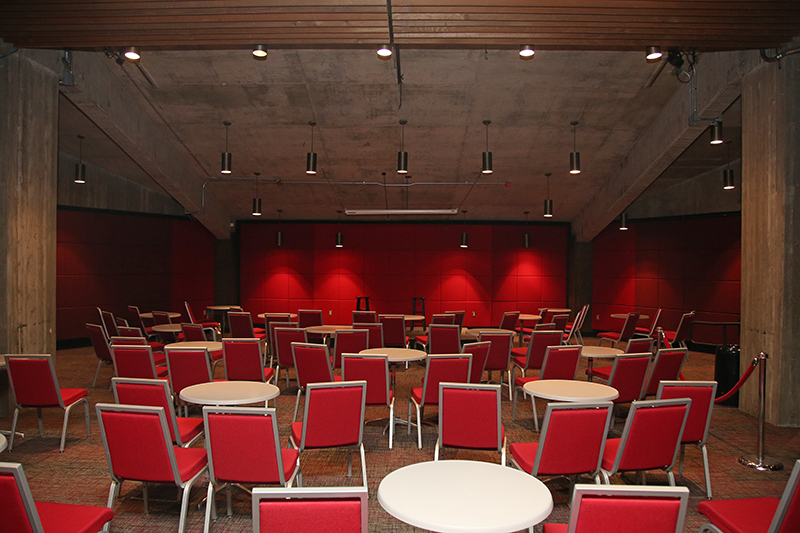 A listening room for Iowa songwriters, the Goldfinch Room, will debut Jan. 26, a venue nestled in the renovated Celebrity Cafe space on Stephen Auditorium's ground floor. Photo by Blake Lanser.

The Iowa State Center is premiering a new venue later this month, a club-like setting for small acoustic shows tucked inside Stephens Auditorium.

The Goldfinch Room, named for the state's official bird, will be a listening room for singer-songwriter performances, especially Iowa artists, said Tammy Koolbeck, Iowa State Center executive director. It debuts Jan. 26 with two shows by a trio of musicians that includes two Iowans: Chad Elliott of Lamoni and Patresa Hartman of Des Moines, along with Tommy Lewis of Texas.

The 100-person venue is in Stephens' Celebrity Cafe, the ground-floor multipurpose room that often hosts pre-show talks and meet-and-greets with performers. For Goldfinch Room shows -- and other talks in the cafe, potentially -- a new donor-funded curtain system will cordon the space off from nearby stairs to create a more intimate feel and improve sound quality, Koolbeck said.

"There's a lot of live music going on in Ames, but there's not anything that's specifically a listening room," Koolbeck said.

Creating a venue ideal for performing songwriters wasn't on Koolbeck's mind when the space was renovated a little more than a year ago -- a $75,000 project that included restroom updates and a new stage, carpet, wall treatments, lights and furniture. But the idea clicked after she watched Elliott play the Prairie Moon Winery north of Ames and, at a conference, saw a presentation about Nashville's iconic listening room, the Bluebird Cafe.

"We just took this as an opportunity to look at that space in a new way," she said. "We're bringing the Bluebird Cafe to Iowa." 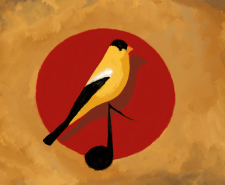 Patterning the venue off the Bluebird, Koolbeck said they decided on the bird-based name without realizing the goldfinch is black and gold, a color combination often avoided on campus. The solution was incorporating Cyclone colors into the venue's logo, which was designed by Elliott, she said.

To avoid stepping on any toes, Koolbeck ran the idea past Jim Brockphaler, who oversees Maintenance Shop entertainment in the Memorial Union. He was supportive and agreed there would be little conflict with M-Shop bookings aimed at drawing a student crowd. Koolbeck said while Goldfinch Room performances are open to the public, she anticipates they'll draw an audience of faculty, staff and community members.

Based on the inaugural night's ticket sales, filling seats won't be a problem. Without any promotion beyond a press release distributed last week, the initial show sold out within days. Since then, Koolbeck said, they've added a second performance. After the sold-out show from 6-8 p.m., the late show will begin at 9:30 p.m. Tickets are $30 for a table for four and $20 for a table of two. Standing-room-only tickets for $10 may be sold the night of the show. Wait service will be available, with options that include cheese platters, hummus, popcorn, cookies and candy, along with wine, beer and soda.

Purchase tickets online or by calling the Iowa State Center ticket office at 294-2479 on weekdays from noon to 6 p.m.

Koolbeck said the Ames Community Arts Council is sponsoring a yearlong series of monthly or bimonthly Iowa songwriter showcases at the Goldfinch, including the Jan. 26 performances. No dates are set for the next event, but Koolbeck anticipates a show in March and another in April or May.

Award winners are among 14 films to be shown spring semester. Admission is free.

Black detective who posed as a white Klansman is among this month's speakers.

After record year for female candidates, Ready to Run is back
Iowa State senior earns $35,000 scholarship
ITS team takes tech beyond the classroom