A Minneapolis highway bridge collapsed in 2007 during an afternoon rush hour, killing 13 people and leaving 145 injured. Assistant professor of civil, construction and environmental engineering Simon Laflamme says that today's technology, had it been available then and installed in the correct location, could have detected a local anomaly and closed the bridge, potentially avoiding the disaster.

Laflamme is working with the Iowa Department of Transportation (IDOT) to develop skin-like sensors to monitor steel girder supports and ensure the safety of bridges in Iowa.

"We want to detect a fracture before it becomes a big problem," Laflamme said.

Stress fractures are small cracks in the support beams of a structure. They can result from repeated heavy traffic or natural processes.

"Cracks are very dangerous, and being able to detect them is very hard, but the skin would be able to do that," Laflamme said.

This skin is a flexible ethylene-butylene-styrene material, similar to what is used in some medical prostheses, and analogous to human skin.

"The skin is a flexible electronic," Laflamme said. "It gives a signal, and that signal depends on its geometry. If there's a change in geometry, for example from a crack, the signal will change."

Bridges and other complex structures are examined by visual inspection or methods of non-destruction evaluations such as thermography and acoustic emission -- approaches that are expensive.

Laflamme's relatively inexpensive electronic skin technology would constantly update data from a monitored structure to a computer system. The system operator would receive notification if there were a significant change that triggers a reaction.

Because the skin can detect a fracture as small as 0.254 mm wide -- one-fifth of the thickness of a penny -- engineers can close bridges and investigate the damage before a crack leads to something more serious.

"The skin gathers data on large areas of interest. We can look at the data to try to predict danger," he said. "It could save lives."

Many of Iowa's steel girder bridges have been in service for more than 30 years and are beginning to show signs of fatigue, according to IDOT.

The department has tried various procedures to monitor and prevent cracks, but none of their efforts have proven to be cost-effective. To ensure the safety of bridges, routine inspections are carried out to determine physical and functional conditions and observe any changes.

Laflamme said that, while the skin is not a solution to every problem a bridge may have, it still could help monitor the condition of support beams and ultimately protect drivers.  He noted that the skin technology can't predict fractures, but he's hopeful the technology might advance to that point.

His research has attracted national attention and is being tested by a pool of other states.

"There are other people who do skin-type sensors, but this is one of the first that can be done on a large scale, at a low cost," Laflamme said. "It's a big step forward in the field of structural health monitoring." 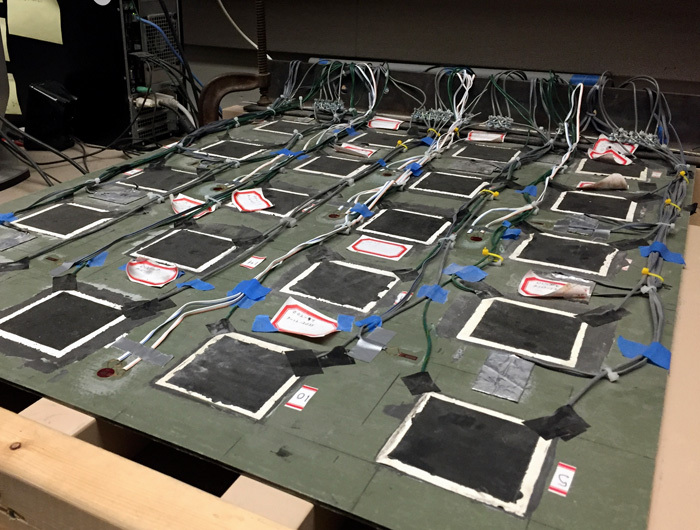 These skins are being tested in Iowa State labs to determine their efficiency and accuracy. Tests simulate deformations of a structural component and analyze the response that sensors recognize as changes in the geometry of the structure. Photo by Megan Gilbert.

Lynn Miller, May 5
Denny Goodrich, May 6
Rick Abell, May 6 (no event)
View Archive ›