Algae: A possible source of biofuel for Iowa 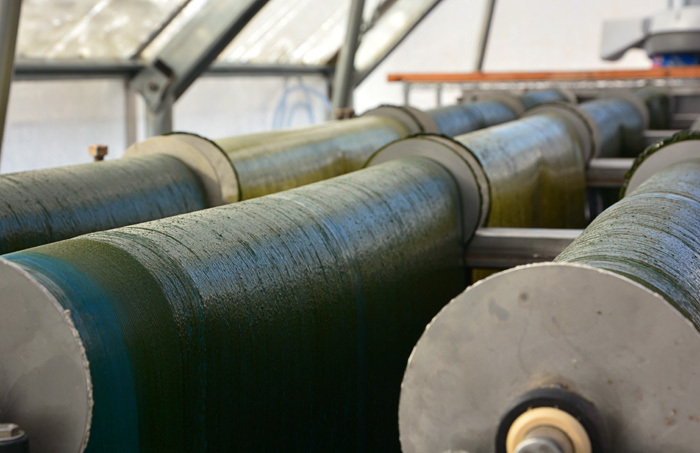 At ISU's BioCentury Research Farm, researchers developed a biofilm-based revolving algal biofuel system, which dips algae in water but allows it to grow vertically and remain concentrated for easy harvest. This allows up to 10 times the productivity in the same footprint while removing 30 percent of the cost of traditional tank-based harvesting. Photo by Kelsey Faivre.

A rising star in the world of biofuels has the potential to not only fuel trucks, but also clean water, feed livestock and fertilize crops. Algae, a microorganism that usually is considered a nuisance, is gaining ground and redeeming itself as a source of fuel for the future.

In a state where water quality concerns are high, algae grows on farm ponds, takes over Lake LaVerne in the summertime and has become a huge concern for the Gulf of Mexico. According to a study published in Ecological Engineering, algae produce toxins that can be harmful to human and animal health and result in serious ecological damage. However, when used to treat wastewater, algae can help prevent too many nutrients, such as nitrogen and phosphorus, from getting into bodies of water and causing harmful algal blooms.

Algae can be harvested and processed into a liquid biofuel, or a fuel that is derived directly from plant matter. According to a study published in Energy Policy, algae have the potential to be a more sustainable fuel option than corn, fossil fuels or grasses. Similar to a corn kernel used for ethanol, only part of the algae is needed to produce fuel. The remaining biomass can serve other purposes.

Gross, whose research primarily has centered around finding the best way to harvest algae, said they can play an important role in the future of biofuels, though perhaps not as a competitor to existing biofuels. He said the push for biofuels is strong, and algae biofuels can coexist with corn ethanol and soybean biodiesel, two of the most common biofuels used today.

There are some limitations to the production and processing of algae into biofuels. Even with new innovations, such as biofilm for easy growth and harvest of algae developed at Iowa State, it is hard to make the economics work in favor of algae. Low fuel prices and low agriculture commodity prices, Gross said, are not good for the biofuel industry. It's tough to produce a gallon of algae biofuel that is inexpensive enough to compete in the market, especially with some of the inherent challenges of processing algae.

"The downside is that it's wet," Gross said, laughing.

The vast majority of biofuel processing facilities have been developed for dry feedstock -- materials such as corn and soybeans. This requires algae to be dried down before it can be processed using existing methods, which adds to expenses.

There are some new algae technologies on the horizon. Algenol is a Florida-based company working to genetically engineer cyanobacteria, a microalgae, to produce and secrete ethanol as it grows. Gross said this is promising technology, but faces challenges moving forward because even common genetically engineered, easily traced crops like corn face a tough regulatory environment. There are concerns about how a microorganism like cyanobacteria will stay contained and prevented from entering the wild, according to Gross.

New processes are being developed for the growth, harvest and processing of the microorganism that could change its place in the biofuels arena. For Iowans, this could have an impact not only on the price of fuels, but also the quality of the water released into lakes and rivers from municipalities. That could equate to a state that has algae growing to its benefit instead of its detriment.

Lynn Miller, May 5
Denny Goodrich, May 6
Rick Abell, May 6 (no event)
View Archive ›